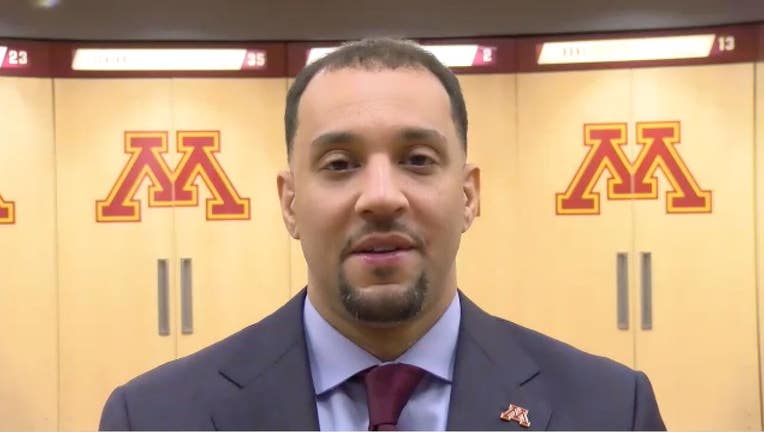 Gophers MBB Coach Ben Johnson talks with FOX 9's Dawn Mitchell about his full-circle moment, returning to the University of Minnesota, but this time as head coach.

(FOX 9) - Ben Johnson is a two-time Minnesota State High School champion with DeLaSalle, a former Gophers player and assistant coach, and now is finally getting his chance to be an NCAA Division I head coach in his home state with the Gophers at the University of Minnesota.

Johnson, 40, has been an assistant coach at six different programs over the last 17 seasons, including five years at Minnesota under Pitino. He was most recently the lead assistant at Xavier under Travis Steele, helping the program get consecutive recruiting classes ranked in the top 30 in the country.

Johnson spoke with FOX 9’s Dawn Mitchell about what this full-circle moment means and just how important it is to him on many different levels.

Eight days ago, Coyle parted ways with Pitino after eight seasons. The process for Johnson started with a Zoom interview. He traveled to Minnesota to meet in-person with Coyle and President Joan Gabel last weekend, sporting a Gophers’ pullover. He had some nerve-wracking and tense moments until he got a call from Coyle. He was announced Monday night as the next Minnesota coach.

Johnson is back home where his life in basketball started. The Minneapolis native and former DeLaSalle star, who scored more than 2,200 points and won two state titles with the Islanders, will now get his coaching stool on the raised floor at Williams Arena. He considers coaching the Gophers his dream job, and it’s now on his shoulders to get the program back to regularly competing for Big Ten titles, and going to the NCAA Tournament.

He was the main reason local stars like Daniel Oturu, Gabe Kalscheur, Jarvis Omersa and Amir Coffey stayed home. But too many times in the last eight years, other top talent has gotten away. Johnson hopes to change that.