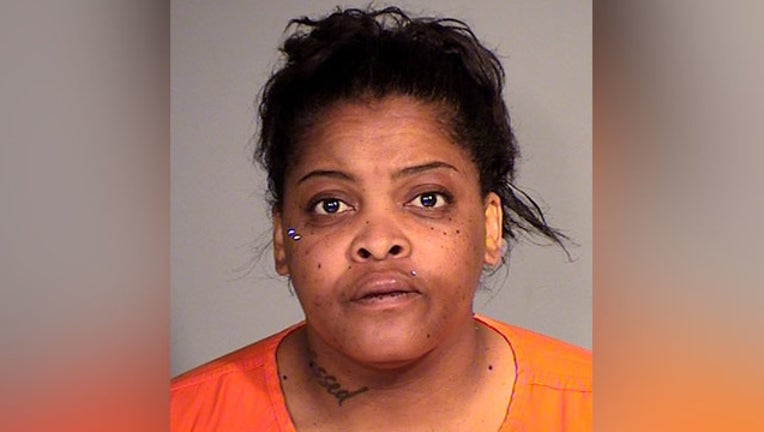 Tametria Gillespie, 40, of St. Paul, Minnesota is charged with shooting her boyfriend in Roseville Sunday night after an alleged disagreement over where to eat. (Photo credit: Ramsey County Jail)

ROSEVILLE, Minn. (FOX 9) - A 40-year-old St. Paul woman is charged with second-degree attempted murder after she allegedly shot her boyfriend in the parking lot of a strip mall in Roseville, Minnesota Sunday night.

The complaint states that at 10 p.m., Roseville police officers responded to the 1600 block of Rice Street after a woman, who identified herself as the shooter, called 911 to report the shooting.

When officers arrived, they found the victim, a 41-year-old man lying on the ground near a Honda Civic parked near the entrance to the strip mall. He was bleeding from his head and near his right armpit.

The suspect, identified as Tametria Shavondra Gillespie, standing near the car holding a phone. She admitted to officers that she shot the victim. Officers found a handgun sitting on the trunk of the Honda Civic.

Emergency personnel transported the victim to Regions Hospital, where he remains in critical condition. Doctors confirmed he had been shot three times.

In an interview with investigators, Gillespie claimed she shot the victim in self-defense.

She told investigators she was driving the Honda Civic with the victim, her boyfriend of 10 months, in the passenger seat. She said the two began arguing about going somewhere to eat.
Gillespie said the victim hit her several times in the face while she was driving and told her he would kill her.

According to the charges, surveillance footage of the incident showed the victim walking up to the strip mall when the Honda Civic drove from northbound Rice Street into the driveway and stopped in front of his walking path. Gillespie got out of the vehicle and appeared to strike or thrust towards the victim three times. He fell to the ground.

A witness told police they heard a woman yelling, “Don’t put your hands on me!” The witness then heard a single gunshot and saw a man falling slowly to the ground near the side of the Honda Civic.