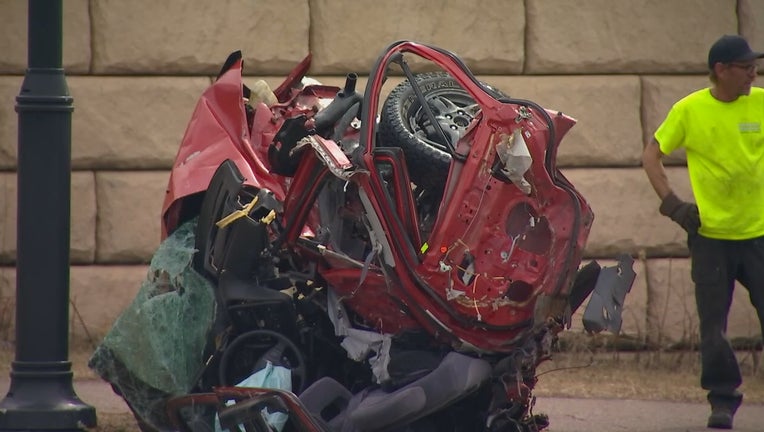 Minnesota State Patrol officials say speed was a factor in a deadly crash on Easter Sunday in Burnsville, Minnesota. (FOX 9)

(FOX 9) - As the temperatures warm up for the spring and summer, police are urging drivers to cool down following a deadly car crash in Burnsville Sunday killing two 22-year-olds, and injuring two 17-year-olds.

Officials from the Minnesota Department of Public Safety say speed played a factor in the deadly car crash.

Minnesota State Patrol is seeing a jump in crashes with speed as a factor on Minnesota roads.

Sunday’s incident brings the total number of road deaths in the state to 80 people with at least 33 attributed to speed.

"It does keep me up at night because I’m trying to find ways to bring this back under control," said Mike Hanson, who serves as the director for the Office of Traffic Safety, a division of the Minnesota Department of Public Safety (DPS).

The number of car-related deaths in 2021 is already surpassing the numbers compared to this time in 2020 where figures from DPS show 76 people died on Minnesota roads.

"Anytime you’ve done a death notification and sat at that kitchen table with a family who’s lost a loved one because of somebody else’s bad choice, that frustrates me," said Hanson. "Speed related fatalities - every one of the 31 so far - didn’t have to happen."

With more people staying home during the pandemic, public safety leaders say it created more space for drivers to push the speed to numbers that just don’t belong on the road.

"We’re seeing some really scary stuff," Hanson added. "The state patrol already, this year alone, has written over 200 tickets for driving over 100 miles an hour."

And while DPS said it's working on education, outreach, and even increasing enforcement, they can’t do it alone.

"We need voluntary compliance," said Hanson. "We don’t need every driver out there to get a ticket for speeding. We need every diver to make smart decisions behind the wheel."