ST. PAUL, Minn. (FOX 9) - The St. Paul Police Department announced Monday it is taking the lead in the investigation into the four people found dead in an abandoned vehicle in western Wisconsin after investigators determined the murders occurred in St. Paul, Minnesota. 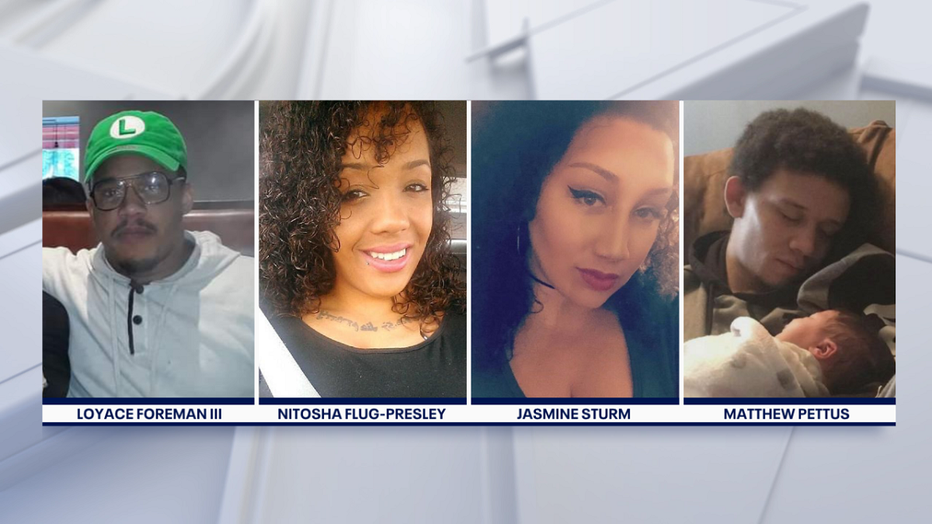 All four victims were found left in a corn field in rural Dunn County, Wisconsin.

Thirty-five-year-old Loyace Foreman III, 26-year-old Matthew Isiah Pettus, 30-year-old Nitosha Lee Flug-Presley and 30-year-old Jasmine Christine Sturm were found by a farmer in a cornfield outside the Town of Sheridan in Dunn county on Sept. 12. The Dunn County Sheriff’s Office initially took the lead on the case.

On Wednesday, St. Paul police officers arrested 56-year-old Darren McWright of St. Paul, who also goes by the last name Osborne, in connection to the deaths. He is currently being held in the Ramsey County Jail.

Gathering together outside Mount Olivet Baptist Church in St. Paul, the families of Nitosha Presley and Loyace Foreman say they won't rest until they have all of the answers.

McWright’s son, 37-year-old Antoine Suggs, turned himself into police in Gilbert, Arizona on Friday after investigators announced he was wanted for questioning. He remains in jail in Arizona, awaiting extradition, according to St. Paul police.

Both men are charged with four counts of hiding a corpse, according to complaints filed in Dunn County District Court.

The case remains under investigation. The Minnesota Bureau of Criminal Apprehension, FBI and ATF are also working on the case.

The Dunn County charges say Flug-Presley was in the front passenger seat while the other three were in the back seat. The driver's seat was empty. Investigators found Suggs' Arizona ID inside the SUV. Each victim had at least one gunshot wound to the head.

According to the charges, on Sept. 13, a tipster told the Dunn County Sheriff's Office they had seen two vehicles, a Mercedes and a Nissan, near the Sheridan Town Hall hours before the car been found with the bodies inside. They said one of the men driving the vehicles was wearing a shirt that said "I am Black history" on it.

Investigators recovered video surveillance of the vehicles stopping at the nearby gas station and Bridge Stop convenience store around 12:08 p.m. The man wearing the shirt, later identified as Osborne, was seen walking into that store. After viewing the surveillance footage, a deputy found suspected blood on the ground near where the Mercedes was parked and drove through.

From the surveillance video, authorities got the license plate of the Nissan, which traced back to a home in St. Paul. A family member said Suggs was in town visiting from Arizona and that Suggs had borrowed car on Sept. 12. The Nissan had been returned by Sept. 13 and was at the home when an investigator visited.

Two of Flug-Presley's relatives told authorities that she had a relationship with Suggs, the charges state. However, her father Damone Presley, Sr. said that's not the case. The criminal complaint shows she had a contact for Suggs in her phone.

A witness told investigators they last saw Flug-Presley, Sturm and Petts near a bar in St. Paul in the early morning hours of Sept. 12 and saw them get into a black SUV. Employees of the White Squirrel bar in St. Paul were able to identify Suggs from a photo lineup and stated they were "90% sure" they saw him with Flug-Presley.