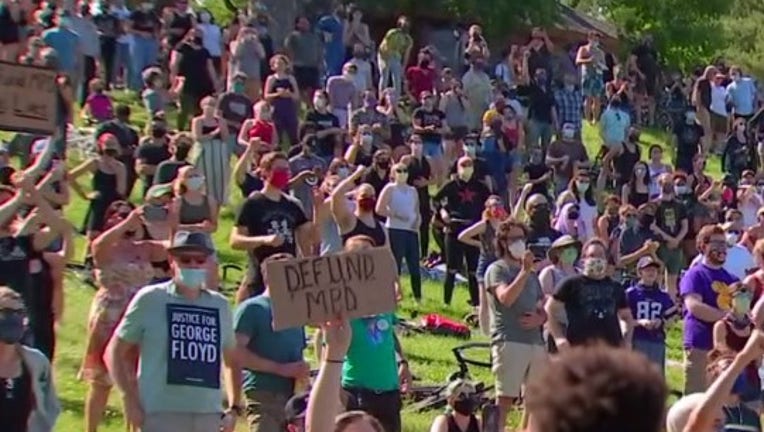 Minneapolis residents gathered for a discussion about the city's police department in Powderhorn Park in June. There, council members said they vowed to dismantle the existing department.

MINNEAPOLIS (FOX 9) - The death of George Floyd sparked a reckoning of policing and race relations in the city of Minneapolis, leading many to believe that change was needed.

It has been six months since Floyd’s death. What has actually changed since that infamous day?

According to a release from the mayor's office, the new policy states that outside of limited, exigent circumstances - like a hostage situation - MPD officers will be required to announce their presence and purpose prior to entry.

The death of Breonna Taylor in Louisville recently brought the no-knock warrant policy under scrutiny, prompting Minneapolis to examine its own policies.

“This is about proactive policymaking and instilling accountability,” Frey said in the release. “We can’t prevent every tragedy, but we can limit the likelihood of bad outcomes. This new, no-knock warrant policy will set shared expectations for our community and clear and objective standards within the department.”

Earlier this month, the Minneapolis City Council approved giving Minneapolis Police an additional $500,00 to bring in officers from other agencies in an effort to get more officers on the street.

It was an item heavily debated by the City Council and was passed in a 7-6 vote.

At the end of August, almost exactly three months after Floyd’s death, the Mayor and Police Chief announced another new policy requiring officers to use the lowest level of force necessary to safely get a situation under control.

In mid-July, the Mayor and Police Chief enacted a new policy requiring officers to report attempts to de-escalate situations, even if there was no use of force.

On June 28, just over a month after Floyd’s death, the city passed a new policy saying officers involved in “critical incidents” could not review body camera footage before completing their police report.

“It provides a level of transparency around what an officer was experiencing and what they recalled at the time,” said Frey at the time.

A Hennepin County Judge ruled the city must immediately implement six new measures to comply with an order filed by the Minnesota State Department of Human Rights, including requiring officers to report the use of a choke hold or neck restraint, requiring officers to intervene if they see improper use of force and requiring that the Chief make timely and transparent disciplinary actions.

On June 5, a week and a half after Floyd’s death, the City Council held an emergency meeting where it passed an order restricting officers from using choke holds.

City leaders have continued to say these changes aren’t enough. Some want an overhaul of the entire department. More changes are expected as the 2021 budget debate plays out the end of this year.