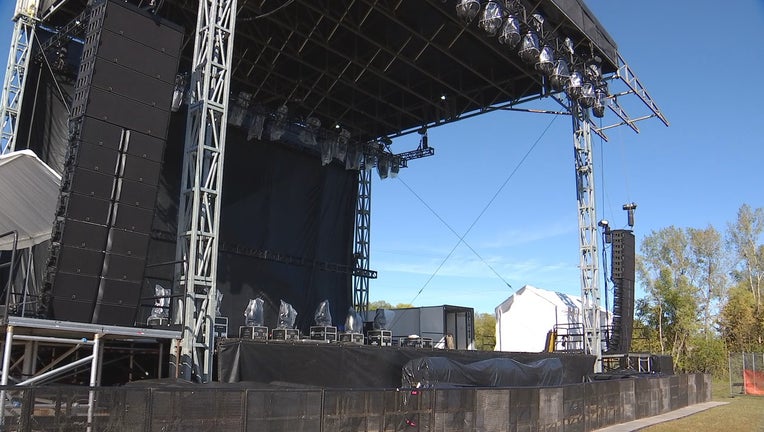 The stage at River's Edge is ready to go ahead of a concert on Saturday.

SOMERSET, Wis. (FOX 9) - An outdoor concert venue in Wisconsin says they’re bringing live music back and have plenty of precautions in place to make it safe.

But public health officials are urging caution as the state reports over 4,000 new cases in the past two days.

An outdoor concert venue in Wisconsin says they’re bringing live music back and have plenty of precautions in place to make it safe.

The stage has been set up at River’s Edge in Somerset, Wisconsin for months but remained empty as planned summer concerts have canceled thanks to COVID-19.

Kaufman says he wanted to bring back live music in a safe way before winter. The first live concert was a week ago and the second one is happening Saturday night with Buckcherry and Hinder.

Rivers Edge says they’re operating at about 10 to 15 percent of their normal capacity, and they point out they have a lot of room to spread out.

Kaufman tells us that equals out to just more than 3,000 people with a cap set at 5,000. Masks are recommended but not required, and there will be three ways to see the concert including a VIP area roped off with a limit of about 200 people.

"We have security in there if people start getting too close we just kindly remind them there’s lots of space out here," said Kaufman.

Other guests can choose to spread out in marked areas on in the grass or they can stay in their cars in the back.

"We went back and forth," recalled Kaufman. "'Is this a good idea or not,' and finally we just said we are concerned - safety first - but we’re also concerned about people not having any fun."

St. Croix County public health officials said while there is no limit in Wisconsin on outdoor gatherings, the county recommends keeping them to less than 50 people.

They also say they are aware of the concert series and are "very concerned" for those in attendance and those they interact with afterward. Kaufman says he understands there are concerns but believes they’re doing all they can to ease them.

"Safety is our first concern for myself and my own family, of course, but I feel the plan we have here the space we have here allows us to do this in the safest way possible," he said.