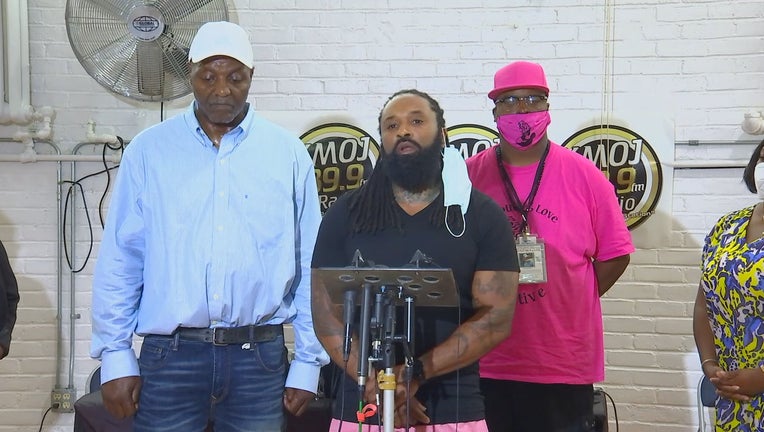 Black Minneapolis community leaders held a press conference on July 7, 2020 to call on the Minneapolis City Council to respond to the recent violence in the city. (FOX 9)

MINNEAPOLIS (FOX 9) - The recent and ongoing crime wave in Minneapolis has some Black community leaders calling on the Minneapolis City Council to help them do something about it.

A memorial of balloons and flowers sits at the intersection where a woman was shot and killed Sunday night. Medical staff delivered her unborn baby, who is fighting for his life. The incident has left some in the community sending a strong message to City Council. They believe there’s a direct connection between the recent violence and the the council’s effort to defund and abolish the police department.

Minneapolis community leaders are calling on the City Council to respond to a recent spike in violence.

“With these calls to abolish the police and no real substantive plan to follow, those words have led some folks in our communities to believe that they have a sort of open season on their enemies,” said Alicia Smith, the executive director of the Corcoran Neighborhood.

At the press conference Tuesday, several community groups were asking why won’t City Council meet with them on police reform and why won’t any of them take a stand against the ongoing violence.

“It’s time to stand up in this city,” said Lisa Clemons of A Mother’s Love. “It is time to tell council that utopia is a bunch of BS. We are not in Mayberry, we are in the wild, wild west.”

While leaving the event, FOX 9 ran into Council member Andrea Jenkins, who said she views the recent violence as “an emergency situation” right now, but that she could not speak for the rest of the council. When asked why council members are using the words “defund” and “abolish” when discussing their plans to change the department, she said she wants to work with the community groups to incorporate their ideas.

“That’s exactly what I’m proposing, work together and come up with some reforms,” said Jenkins.

FOX 9 contacted five other council members on the issue. Jeremiah Ellison responded saying he’s going to neighborhood meetings with the 4th precinct inspector to hear community concerns. He says he does not believe there’s a correlation between calls to defund and the crime wave, but rather the police killing alone is inspiring it.

“If every city has this problem after a police killing and we’re the only city having this current conversation, I can’t see how a rational person will correlate the two,” said Ellison, who represents the 5th ward.

Ellison went on to say they’ve tried police reforms like non-lethal weapons and increased funding, but that nothing has worked. He stands by his belief that it’s time to abolish the Minneapolis Police Department.