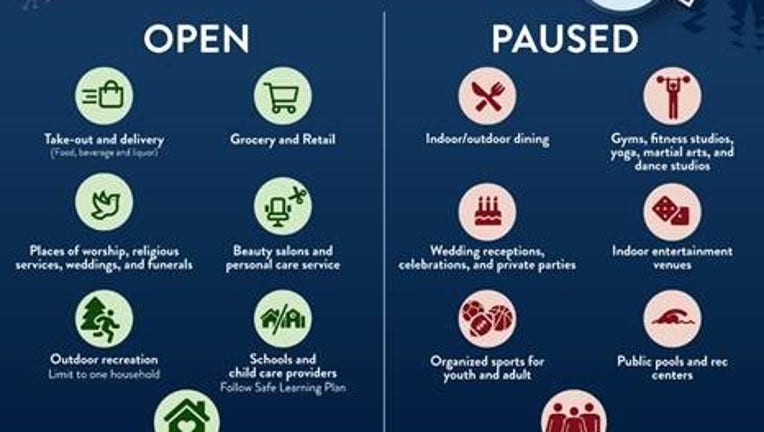 The state of Minnesota released this graphic Wednesday to show what businesses and activities will be dialed back as COVID-19 cases surge statewide. (Office of the Governor of Minnesota)

The Governor said the decision to close some sectors and not others was based on Department of Health data and scientist recommendations.

In a release, Walz said the state is at a "breaking point," as hospital beds fill up and case numbers spike across the state.

"While these actions mean incredible hardship for many, they are the fastest way to recover our economy, keep our kids in school, and get back to the activities we love," Walz said.

The changes come as the Minnesota Department of Health reported a record 67 deaths from COVID-19 Wednesday and 5,102 new cases. Minnesota has seen a 153% increase in coronavirus cases over the last two weeks--the third highest in the nation, according to NBC News COVID-19 tracker.

Minnesota Governor Tim Walz is expected to announce more COVID-19 restrictions as the state faces increasing cases. Meanwhile, Republican officials are responding to a recent outbreak within the party.

Under the new restrictions, bars and restaurants must be closed for indoor and outdoor dining for four weeks. However, they will still be allowed to offer takeout for delivery and curbside pickup.

The shutdown comes less than a week after Walz imposed a 10 p.m. curfew on bars and restaurants and limited bar seating and games.

Gyms and fitness centers will also be forced to close to the public for four weeks under the new restrictions.

Walz will also halt youth and high school sports for the upcoming winter season as well as the ongoing fall season.

The governor said Tuesday that people should expect the high school football season, which got off to a late start due to the pandemic, will end before playoffs are over.

nder the new restrictions announced Wednesday from Minnesota Governor Tim Walz, all social gatherings are prohibited as part of a four-week pause in response to climbing COVID-19 cases statewide.

This is a departure from previous guidance which had set the gathering size limit at 10 people.

Retail stores, salons and barbershops will not be affected by the latest round of restrictions.

Walz added that in the retail industry, transactions are quick, one-on-one and involve mask-wearing at all times.

The new restrictions sparked immediate reactions from lawmakers and business owners who said financial relief is going to be required to make it through the next month.

No specific aid packages have been announced as of Wednesday afternoon. In a press conference after the announcement Wednesday, the Governor blamed the federal response to the virus for helping small businesses and said the legislature, not the executive branch is responsible for appropriations.

He said his office would "settle for a scaled-down" stimulus package that "target small employers and workers."

DEED Commissioner Steve Grove added that money is available for relief, but that the state would have to borrow from the federal government at this point. "We need Washington to act," he said.