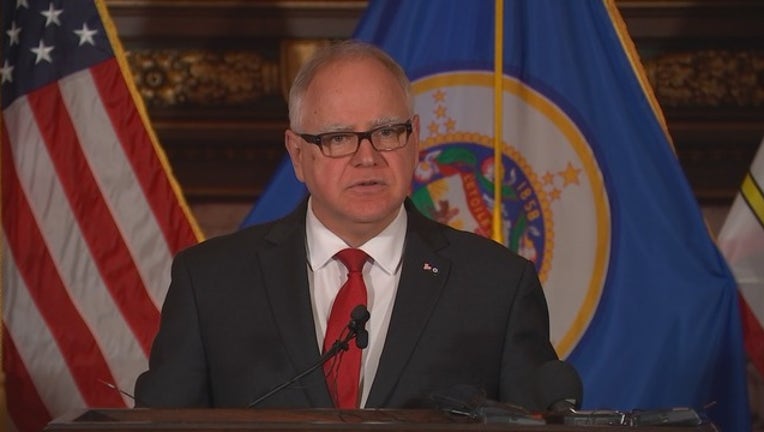 ST. PAUL, Minn. (FOX 9) - Gov. Tim Walz has issued a written reprimand to his commissioner of Iron Range resources, as the governor tries to clear his name from cronyism allegations at the state Capitol.

Walz told Mark Phillips that he fell “far short” of expectations by hiring former Democratic politician Joe Radinovich for a $100,000 state job. Phillips and the Department of Iron Range Resources and Rehabilitation skirted state rules by posting the position for less than 24 hours instead of 21 days, and records indicate IRRR invoked Walz’s office as the reason for doing so.

“It was inappropriate for you to see to vary from (state) requirements in this case. It was also inappropriate to use my office as your stated rationale,” Walz wrote. “My office never directed you to request a shortened posting period or otherwise vary from ordinary hiring procedures.”

Walz did not say he would discipline Phillips in any way. Walz said this week he would change state rules to require a 21-day posting period for managerial jobs like the one Radinovich received.

Radinovich said Thursday that he was resigning as IRRR senior policy advisor, effective next Tuesday.

In a Feb. 14 email obtained by FOX 9, Barbara Sanders, IRRR’s human resources director, requested permission to shorten the online job posting to no more than 24 hours.

“The filling of this position, in an expedited fashion, is required in order to meet the expectations of selection and onboarding as expressed by the (MN) Governor’s Office,” Sanders wrote to Patrick Wenum in the Office of Minnesota Management and Budget, which controls human resources functions across state government.

When asked by a reporter earlier this week, Walz said that was “false.”

Radinovich was penciled in for the position before the job was even posted online, records indicate.

Radinovich was offered the $100,000 a year job on March 8. He wrote a letter of resignation Thursday, saying he had become a distraction for the agency.

Here is the full letter from Gov. Tim Walz:

I am issuing you a written reprimand because of your conduct related to your recent posting of the IRRR Senior Policy Advisor position. The process you used for this position, while following permitted procedures, failed to meet my expectations. MMB's Job Announcement Policy's requirement that all classified positions be posted competitively for at least seven days and recommendation that such positions be posted for 21 days are designed to ensure inclusiveness, openness, and transparency in the hiring process for classified positions. It was inappropriate for you to seek to vary from MMB's requirements in this case. It was also inappropriate to use my Office as your stated rationale for requesting an exception from MMB. My Office never directed you to request a shortened posting period or otherwise vary from ordinary hiring procedures.

At my direction, MMB is amending its Job Announcement Policy to require a 21-day posting period for all classified managerial positions like this one. It is my expectation that you will follow the requirements of the Job Announcement Policy for all future hires. You may not vary from this policy unless you receive explicit approval directly from Commissioner Frans.

As a matter of policy, I want to ensure that the state hiring process for classified positions is inclusive, competitive, open, and transparent to encourage people across Minnesota to consider state service. By following the new 21-day posting period, I am confident that we will receive well-qualified applicants from all corners of Minnesota and with diverse and interesting backgrounds and experiences. The inclusiveness, openness, and transparency of this process is important to show the public our values as an Administration—to show Minnesotans that we are worthy of their trust.

As I do with all members of my Cabinet, I expect you to model openness, transparency, inclusivity, and servant leadership. In this situation, you fell far short of my expectations.