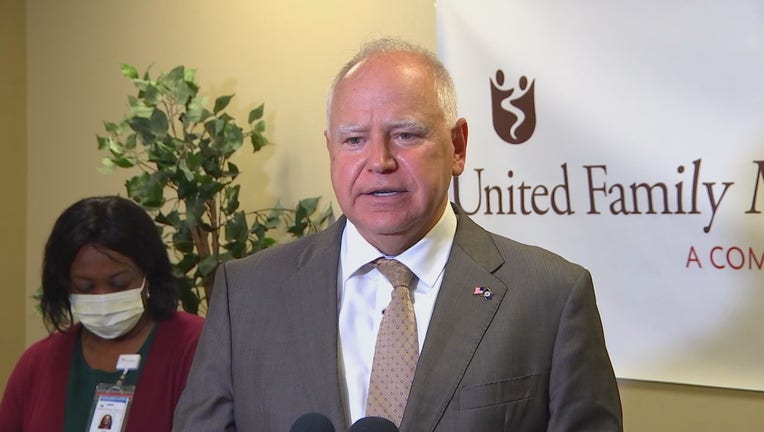 Governor Walz addresses the media after getting his flu shot, emphasizing the importance of getting vaccinated amid the pandemic.

ST. PAUL, Minn. (FOX 9) - Gov. Tim Walz is running for re-election, gearing up for a 2022 campaign that will be a referendum on his handling of the COVID-19 pandemic and last summer's riots.

Republicans have made Walz's handling of the crises central to their campaigns against the governor. Tuesday, Walz mounted a defense of his record.

Gov. Walz announced his bid for re-election in Minnesota.

"We’re on offense and we’re making progress," the first-term Democrat said in a campaign video released at 6 a.m. Tuesday. "But the same people who blocked us, are trying to take us backwards."

Lt. Gov. Peggy Flanagan, Walz's running mate, accused Republicans of having "dangerous views" on masking and vaccines and said the GOP "put politics ahead of science and put lives at risk."

Larry Jacobs, a University of Minnesota political science professor, said Walz's main challenge is to drive turnout in the core cities while keeping suburban voters in the fold.

"He knows that the 2022 campaign is primarily going to be a referendum on him," Jacobs said in an interview. "His job is to make it clear what he’s done."

Walz and Flanagan took office in 2019, but the next year proved the defining moment of their term so far.

In 2020, Walz used sweeping executive powers to shutter schools and businesses as hospitals raised concerns about getting overwhelmed with COVID patients. The governor said his moves saved lives, though Republicans consider them an overreach.

That same year, Walz called up the entire Minnesota National Guard to quell riots in the Twin Cities after George Floyd's murder by a Minneapolis police officer. The GOP said he acted too slowly while liberal activists accused Walz of making Minneapolis a police state.

The Republican governor candidates are vying for their party's endorsement at the GOP convention next year. Who the party nominates will be key, Jacobs said.

"One of the challenges for the Republican party is can they win a majority?" he said. "They haven’t done this in a quarter of a century. In the last three gubernatorial races, they’ve not won more than 45 percent."

Republicans have not won a statewide election since 2006. The GOP's 2018 candidate, Jeff Johnson, received just 42 percent of the vote to Walz's 54 percent.