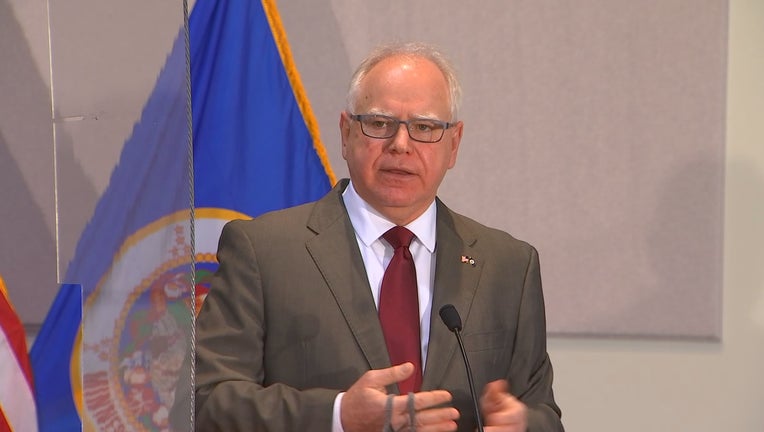 ST. PAUL, Minn. (FOX 9) - A conflicted Minnesota Gov. Tim Walz met with hospital workers Friday afternoon as he mulled a decision that could make the difference whether some restaurants, bars and gyms survive.

Walz told reporters he may not decide until the middle of next week whether to extend the shutdown of thousands of businesses beyond Dec. 18, when his current order is set to expire. They've been shuttered since Nov. 21.

A conflicted Minnesota Gov. Tim Walz met with hospital workers Friday afternoon as he mulled a decision that could make the difference whether some restaurants, bars and gyms survive.

Minnesota has seen an improvement in coronavirus cases in the past two weeks, though health officials caution that several more days of data is needed to assess the trend.

"We are trying to consider everything. No decision has been made," Walz said. "I was not prepared -- this falls on me today. I am not comfortable with making that decision today because the data is still coming in from the (latest restrictions)."

Walz said lawsuits filed by gym owners and other businesses had no bearing on his decision-making.

The governor did not directly answer when asked if he was considering letting restaurants reopen their dining rooms at 25 percent capacity.

"Those who are angry in the restaurant industry, you have every right to be angry. This is horribly unfair," the governor said. "My intention is to try and get this as soon as possible. But we’ve got to try and get it right."

Walz called on Minnesota lawmakers to pass a relief package extending help to closed businesses and laid-off workers. A special session is Monday, but a full deal isn't in place.

Some business owners said they understood the governor was trying to keep people safe, even if they were not optimistic about their own businesses' future.

"I don’t see any way he could make any changes before January," said Courtney Norgaard, who owns Local Roots, a restaurant in Richfield. I understand the logic behind it. It’s just potentially going to kill our business."

Some owners have been pleading with government officials for cash relief during the shutdown.

Others have been asking for loosened regulations. Local breweries are seeing a change in the state's liquor laws to allow takeout growler sales, though no such change is in either of the House or Senate's economic relief packages.

"We’ll be able to earn money, rather than just asking for a check," said Jim Diley, co-founder of Fulton Brewing Company in Minneapolis.

Minnesota's divided Legislature has a tentative agreement to send out $216 million in cash relief to businesses dealing with Walz's closure order. But lawmakers have hit a wall on an unemployment insurance extension: Senate Republicans favor a five-week extension, while House Democrats and Walz want a 13-week boost.

Walz declined to say when asked if he would sign a relief deal that didn't include a full 13-week extension of unemployment benefits, but said, "I don't know how you would go home not providing aid to those folks."

As of Thursday, 1,461 Minnesotans are hospitalized with the coronavirus, down 22 percent since the Nov. 29 peak at 1,864 people hospitalized.

Each day this week, cases were down from the previous week.

Health commissioner Jan Malcolm cautioned against getting optimistic that the state would see a quick return to lower transmission levels, and said several more days of data were needed.

"I know folks are saying we’ve avoided a Thanksgiving bump (after holiday gatherings). It's just too early to say that," Malcolm said. "It boggles my mind that 3,000 cases a day feels like a good number to us. This is still an extremely high rate of virus in the community."

Deaths continue to increase. On Friday, Minnesota reported 94 new deaths -- the second-most on a single day since the pandemic started.

Deaths are a lagging indicator, trailing hospitalizations, which themselves lag newly reported cases.

Hospital workers and executives who appeared with Walz at his Friday afternoon news conference said they were exhausted by the recent surge, and called on people to follow public health guidance.

"If you’re wondering what it’s like to work in an emergency department during a pandemic, you can hardly imagine," said Mimi Keller, an emergency room nurse at St. Joseph's in St. Paul.