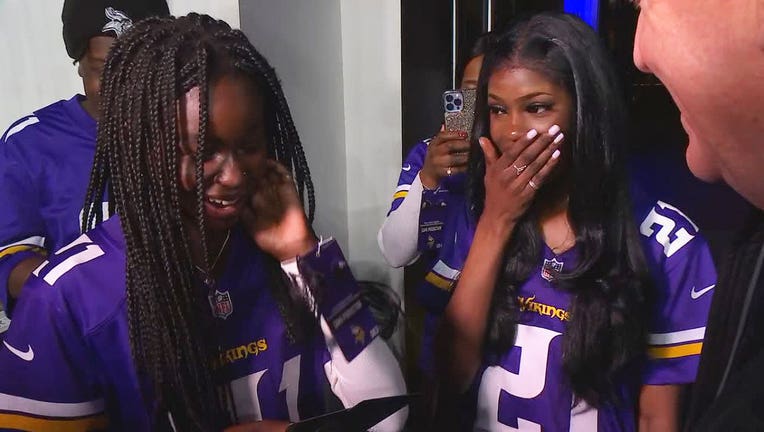 MINNEAPOLIS (FOX 9) - The Minnesota Vikings had a special surprise at Thursday's game for Nya Sigin, the 14-year-old student who was targeted in a racist video made by Prior Lake students.

Wearing custom jerseys gifted from the team, Nya and her family were surprised with tickets to this season's Super Bowl in California. Commissioner Roger Goodell and Vikings owner Mark Wilf presented the Super Bowl LVI tickets to the family before the game against the Pittsburgh Steelers began at U.S. Bank Stadium.

Nya Sigin, the girl who was the target of harassment in a racist video that went viral online, got a huge surprise on Thursday as Minnesota Vikings owner Mark Wilf and NFL Commissioner Roger Godell surprised her with a pair of Super Bowl tickets to this year's game in Los Angeles.

The team invited Nya and her family to the game after members of the Vikings' social justice committee met with them on a Zoom call after the incident occurred last month. According to the press release, Vikings players Anthony Barr, Eric Kendricks, Alexander Mattison and Assistant Head Coach Andre Patterson attended to the virtual meeting.

'At a loss of words': Prior Lake high school student targeted in racist video speaks out

Hundreds of students and community members showed up to Prior Lake High School on Thursday to support the Nya Sigin, who was targeted by a racist video made by a classmate.