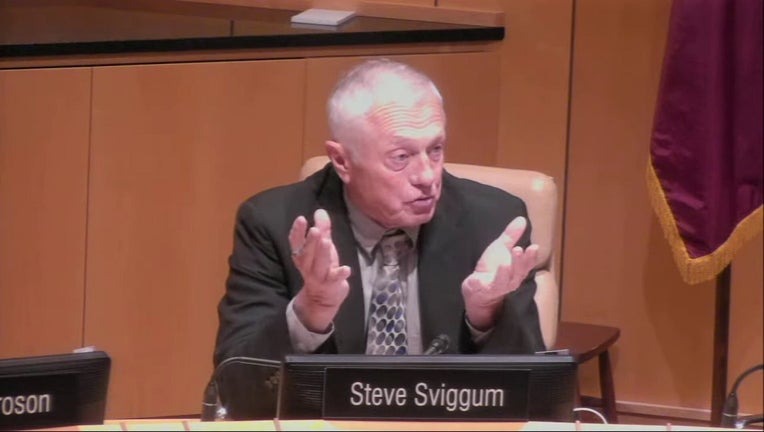 Steve Sviggum speaks at the Board of Regents meeting. (Supplied)

MINNEAPOLIS (FOX 9) - The vice chair of the University of Minnesota's Board of Regents has apologized in the wake of intense criticism he faced after questioning whether low enrollment at the university's Morris, Minnesota campus is the result of "too much diversity."

"Let me unequivocally apologize for my questions, and especially for the unintended hurt my questions may have caused," Vice Chair Steve Sviggum said in a statement he issued during an appearance on Henry Lake's 6 p.m. show on WCCO Radio on Tuesday. "They were not intended to cause harm, but my intent does not matter. For those whom I have harmed or offended, and for all of those associated with our great university, I am truly sorry."

When asked if he thought he should step down, Sviggum said simply: "No"

Sviggum made his controversial comments during a meeting last week when the board discussed issues with declining enrollment at Morris, which has seen a 44-percent drop over the last ten years from 1,896 enrolled students in 2012 to 1,068 students in 2022.

University of Minnesota regent questions if Morris campus is 'too diverse'

The vice chair of the University of Minnesota's Board of Regents is facing some criticism after questioning whether diversity at the university's Morris, Minnesota campus is facing low enrollment due to "too much diversity."

Speaking during the meeting, Vice Chair Steve Sviggum, a former state rep, raised a controversial question, pondering if enrollment decreases at the Morris campus, in rural west-central Minnesota could be attributed to "too much diversity."

"As a campus and as an institution of the university, we like to promote and we need to promote and it's important to promote DEI and diversity," he explained. "It is possible that at Morris, we've become too diverse?"

"Is it possible at all, from a marketing standpoint," he continued. "For instance, I've received a couple of letters -- two actually -- from friends whose children are not going to go to Morris because it is too diverse of a campus. They just didn't feel comfortable there."

"Is that at all possible in the specific of Morris that we become too diverse for a student to attend? And again, I'm on thin ice. I understand that. At 71 years or 72 years old, I say things that I would've never thought when I was 52. But it gives you a little of freedom to do that."

Enrollment data shows the number of students at the University of Minnesota-Morris who identify as white has fallen from 1,348 in 2011 to 579 in 2022. In that same time period, the number of students from other backgrounds has also fallen at the school from 583 to 488, but with most of that loss coming from fewer international students.

Sviggum took a different approach when speaking with WCCO Radio's Vineeta Sawkar on Monday, defending his questions and arguing he was pondering what might be an ugly truth.

"Isn't it a legitimate question that should be asked," argued Sviggum. "As a public decisionmaker, in this case – the University of Minnesota case – don't you think that every program we have, every policy we have, should be at least questioned? Nothing should be above or below questioning. I think it's fair to at least ask the question. I don't see asking a question as being offensive or wrong and certainly, certainly, not racist."

Sviggum also relented that there are plenty of other factors – like tuition costs, more competition from other colleges, and fewer high school graduates to begin with.

Sviggum has faced a growing tide of calls for his resignation, including from Lake and DFL state representatives Tina Liebling and Jamie Long.

MCSA President Dylan Young, who is of Native descent, invited Sviggum to campus to have dinner with MCSA leadership and members of the campus community who come from marginalized backgrounds.

In a statement, Young said the hope is by the end of their time together, Sviggum will be able to let his "two friends and their children know that diversity should be embraced – not feared. For that is integral to the mission of higher education and all we stand for," the statement said.

Young stressed that while the diversity at the University of Minnesota, Morris might make some prospective students "uncomfortable, I reckon that it has the exact opposite effect on a far greater number of students."

When looking to overcome struggles with enrollment, the university "cannot turn its back on the values of equity, diversity, and inclusion out of fear and discomfort. We need to embrace them," Young said.

"Last week, during University of Minnesota Morris Interim Chancellor Erickson’s presentation on MPact 2025 enrollment goals at Morris, I posed a question regarding the diversity of the student body and whether that diversity was—in any way—linked to the recent enrollment challenges.

Let me unequivocally apologize for my questions, and especially for the unintended hurt my questions may have caused. They were not intended to cause harm, but my intent does not matter. For those whom I have harmed or offended, and for all of those associated with our great university, I am truly sorry. I have only respect and admiration for any individual who seeks to better themselves through higher education, whether at Morris or at any of our wonderful campuses. Minnesota benefits from our many amazing students from all walks of life who make incredible contributions to our community, and their work strengthens the great state of Minnesota. I hope that all of our graduates elect to stay in Minnesota after graduation and work, every day, for the betterment of our state.

My intent – recognizing that my words matter – was to foster discussion around the consistently declining enrollment at Morris, which is not a one-year trend or even a concern that has emerged out of the COVID pandemic. Rather, student enrollment has been declining for years (down 50% from its peak) and the future of this great campus depends on finding solutions to reverse that trend.

I have been blessed throughout my life as a farmer to work with a diversity of people across our state and our nation from all backgrounds. As a layperson in my church, I have shared the joys and heartbreaks of so many of my fellow parishioners. And as a proud Regent, I have been given the incredible opportunity to help our institution, our president, and our students, staff, and faculty who set a very high bar for the rest of us.

Again, I offer my sincerest apologies. I clearly have more to learn to better understand the strength that diversity brings to our institution, and I look forward to taking those who have reached out to me up on their offers to meet and to hear their perspectives and learn from them. I am willing to learn and I must do better—and I will."