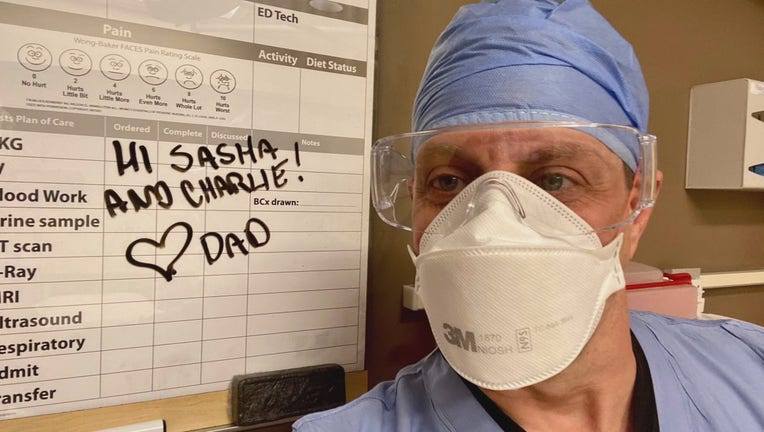 An ER nurse in St. Paul was terminated after wearing hospital-issued scrubs instead of his own.

ST. PAUL, Minn. (FOX 9) - A former United Hospital nurse is speaking out after he was terminated for violating hospital policies he says he did to protect his co-workers and his family.

Friday, an emergency department nurse was escorted out of United Hospital and terminated for wearing hospital-issued scrubs. On Tuesday, he was trying to raise awareness of the possibility of spreading the virus by wearing personal scrubs.

A former United Hospital nurse is speaking out after he was terminated for violating hospital policies he says he did to protect his co-workers and his family.

Cliff Willmeng said being fired felt like his heart was torn out of his chest.

“Never would I have imagined being threatened with termination for advocating for patient care and workplace safety,” he said.

He was terminated Friday from the Allina Health Care System hospital for wearing surgical scrubs, which are reserved for doctors and physician’s assistants. Allina says Willmeng was only permitted to wear personal scrubs.

“I realized that I wasn’t doing everything that I could to protect my family from this and some things were escaping my attention were sitting right there, and so the hospital-issued scrubs were a no-brainer,” he said.

The hospital-issued scrubs are kept at the facility and laundered there, while personal scrubs are taken home with the nurses.

“The reason that they are in the hospital is so that infection does not get spread on textiles,” Willmeng said.

In a statement, Allina said, “Allina Health’s employees are the foundation of our organization. Without them, we would not be able to serve the health care needs of our communities. It is never easy to part ways with an employee.”

Allina went on to say it is adhering to the latest guidelines which do not consider hospital-issued scrubs PPE.

“Once we go to work we are within inches of this virus that everyone is going to such lengths to avoid,” he said. “We can’t avoid it. We are right there and so we have to have this PPE. This is our life blood. This is our armor.”

Next Wednesday, May 20, the Minnesota Nurses Association is planning a march from United Hospital to the Capitol to help raise awareness on the need for PPE.