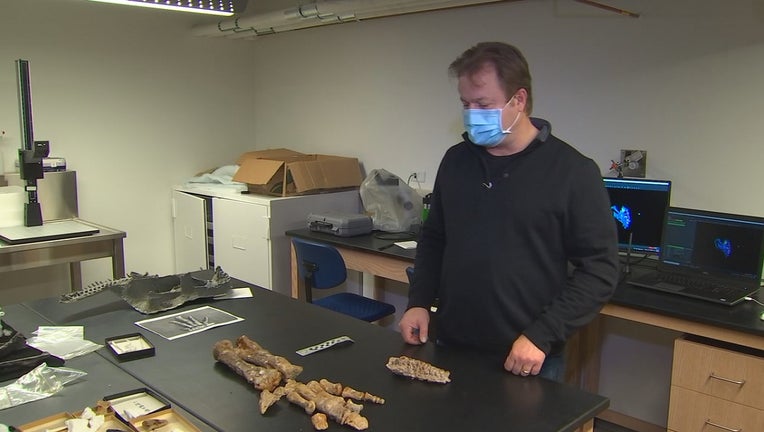 University of Minnesota Professor Peter Makovicky is part of a team that believes they've unearthed a previously undiscovered species of dinosaurs. (FOX 9)

(FOX 9) - A University of Minnesota professor is part of a team that believes they've unearthed a previously undiscovered species of dinosaurs.

Professor Peter Makovicky has made about six trips to a dig site in Missouri, and this fall brought out the last major part of their find.

A University of Minnesota paleontologist helped lead the dig on a new dinosaur species found in Missouri.

Stored in bits and pieces in a basement lab at the U is something very, very old that is very new to scientists: a duck-billed dinosaur fossil.

Dr. Makovicky first joined digs at a fossil site in Missouri in 2017, a place where dinosaur bones had first been found in the 1940s.

The bones were preserved, having been embedded in clay when the group unearthed a skull four years ago. It was then that they suspected it was actually a new species of dinosaur, as the teeth were clearly from a plant-eater.

When they dug up the limbs in 2018 and noticed the unique spiked knuckle, it became clearer that this was unique.

"This was the first clue that this wasn’t what it had originally been called back in the 40s," Dr. Makovicky said. "The skull was pretty tell-tale and telling us we’re probably onto something new. But, the proportions of the hand bones compared to each other and the presence of this spike was really unlike anything else we find in North America."

In October, the group dug up the rest of the body in a huge slab of claymore than 2,500 pounds. It was then sent to Chicago to be extracted and examined.

The team still has to write a scientific paper, get it published in a journal, and get it peer-reviewed in order to have this new species confirmed.

When asked why not reveal this before now, Dr. Makovicky said it's a question of how much of the dinosaur they need to get out of the ground before they can formally describe it for scientific review. He said there are multiple dinosaurs at the site, suggesting multiple deaths in one place.