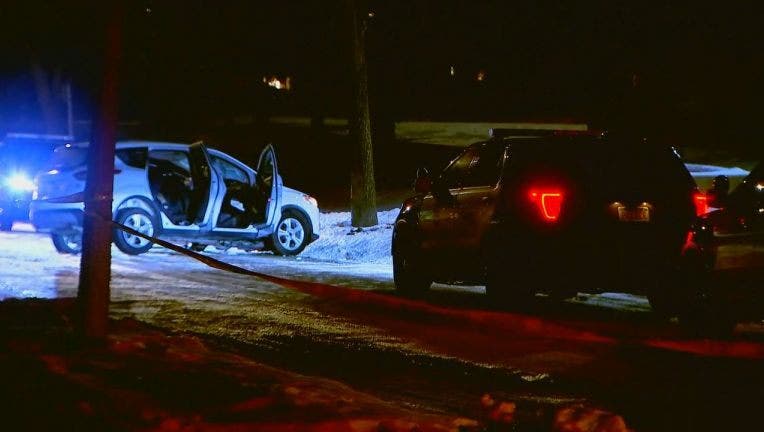 An SUV crashed into a tree in the 1600 block of Russell Avenue following a shooting. The driver died from gunshot wounds. (FOX 9)

MINNEAPOLIS (FOX 9) - Two men have been charged in connection to Thursday night's deadly shooting in the Willard Hay neighborbood of north Minneapolis.

According to the criminal complaint, around 6:30 p.m. police responded to a report of shots fired in the 1700 block of Russell Avenue North. Officers en route then learned a witness also reported gunshots near the corner of Golden Valley Road and Russell Avenue, where they saw a man shoot at a vehicle, which then drove off. After the shooting, they saw two men run into a nearby apartment.

When officers arrived they found an SUV crashed into a tree down the road from where the witness saw the shooting. Inside the vehicle, police found a man, who had two gunshot wounds in his back. Officers tried to revive him, but he passed away.

Officers responded to the apartment where the suspects ran inside. After securing a search warrant, they found two men inside and detained them. A witness told police they saw the two men approach a white vehicle that was parked on Russell Avenue North. The witness saw one of the men try to open the driver's door, then pull out a gun and fire twice, while the second man stood behind him. The witness said the men returned to the apartment and they overheard them talking about the shooting. Based on the witness' descriptions of the two men, police identified the shooter as Moore and the other man as Perkins.

In an interview with police, Perkins claimed he and Moore had been inside the apartment for two hours before the police arrived and did not know anything about a shooting.

Moore and Perkins are both in custody at the Hennepin County Jail.