The Last Harvest: Caught in the Middle

Already concerned about an unusually wet season, Minnesota farmers have become pawns in a high stakes geo-political chess game between the U.S. and China.

(FOX 9) - Already concerned about an unusually wet season, Minnesota farmers have become pawns in a high stakes geo-political chess game between the U.S. and China.

President Donald Trump said he was under no pressure to come up with a trade deal with China before the 2020 U.S. Election.

“I’m not looking for a partial deal,” said President Trump at a press conference Friday. “We’re looking for the big deal.”

Minnesota farmers have noticed, too.

“Every time there’s another announcement, on a delayed trade negotiation deal, we see the market slide again, and again,” said Brent Fuchs, a soybean farmer near Northfield. 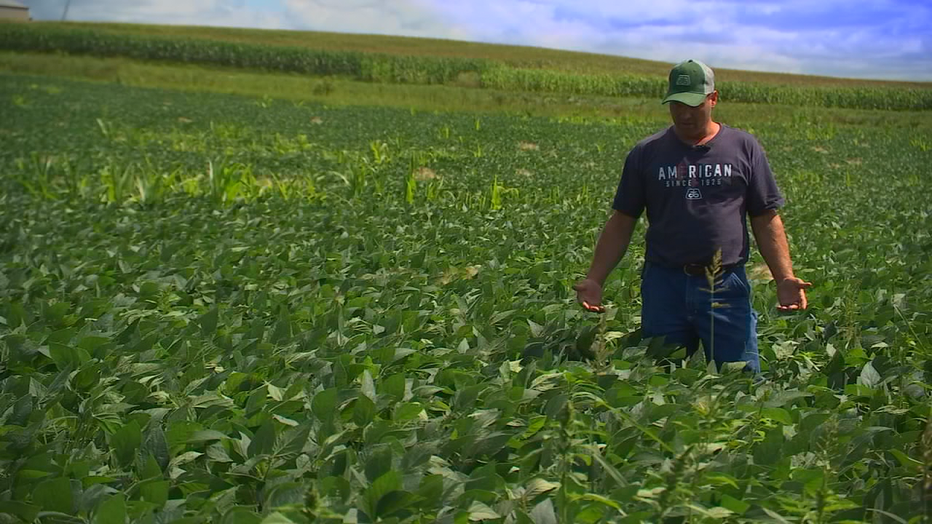 A soybean farmer outlined how Minnesota farmers have become pawns in a geopolitical trade war.

The agriculture commodities market is what sets prices for corn and soybeans, the raw material for the cheapest food in the world.  Those prices have gone up or down, with every headline - and every tweet - from President Trump about tariffs.

As recently as 2017, the U.S. exported $19 billion in agricultural products to China. Soybeans accounted for $12 billion of that. U.S. exports to China have since fallen to $9 billion.

THREE OUT OF TEN SOYBEANS TO CHINA

Minnesota is the third largest producer of soybeans in the U.S. and exported $1.8 billion in soybeans in 2017, according to the U.S. Department of Agriculture.

“Three out of 10 Minnesota soybeans end up going to China. You take that out of production, that’s 30 percent of production we don’t have a home for,” said Fuchs. “We’re the ones feeling the brunt of it.”

There was optimistic news last week that China was making a large purchase of soybeans in October, one million metric tons, equivalent to 20 cargo ships. But, that optimism faded this week with President Trump’s most recent comments.

High level trade negotiations between the U.S. and China are set to take place in mid-October.

Standing in field saturated in a yellow carpet of soybeans, Chris Kalass says his soybeans still need a couple of more weeks before harvest, and he’s willing to give President Trump more time, too.

“We’ve worked hard to develop that market in China,  and it’s certainly something we don’t want to lose at this point,” said Kalass, who grows 500 acres of soybeans near Zumbrota.

“Most people say things have to get worse [with China] before they get better,” said Kalass.

‘THIS IS FOOD WE’RE TALKING ABOUT’

But, some experts believe, regardless of any deal, the damage from the trade war will be long term.

“This is food we’re talking about,” said University of Minnesota Professor Edward Usset, an expert on agricultural commodity markets. He believes China will have simmering resentment.

“Even if we kiss and make up tomorrow, that’s going to have a lingering impact,” said Usset.

China uses soybean meal and corn to feed pigs. Pork has become the protein of choice for China’s burgeoning middle-class.

China’s demand for American soybeans may be diminished due to African Swine Fever, which is decimating herds in China.

Verified estimates are hard to obtain, but it has been widely reported that China may have destroyed as many as 350 million pigs who have developed African Swine Fever.

It may be another opportunity lost for Minnesota farmers.

At this years FarmFest, U.S. Agricultural Secretary Sonny Perdue got an earful from Minnesota farmers. Instead of comforting words, he retold a tone deaf joke.

“What do you call two farmers in a basement?’ Perdue asked. “A whine cellar.”

There may not be a magic carpet, but there was a bailout, the so-called ‘Market Facilitation Program.'

Minnesota farmers have received $681 million in payments for the hard times, the third most in the nation behind Iowa and Illinois, according to USDA data obtained by FOX 9. Those payments are capped at $125,000 per farmer.

But, a FOX 9 analysis found 139 large operations and co-ops used various loopholes to exceed the cap. Seven operations got more than a half-million.

When it comes to farm subsidies of all kinds, the bigger the operation, the bigger the payment. Need is seldom taken into account. Payments in the second round of MFP from September 2018 to July 2019, were based on the number of acres.

“I don’t know if you could ever make it fair,” said soybean farmer Kalass. “But, in the last year, I’ve heard of more people getting out of it...because the economy is so good outside of farming.”

Other farmers wonder if they’re a victim of their own success, producing more food more cheaply than ever.

“I ask myself what we’re doing,” said Fuchs.

“What’s the only variable you can do to get more dollars at the end of the year?” asked Fuchs. “Increase production. The more bushels, even at a lower price, the more dollars you can generate.”

It can seem like a circular trap, one in which only the larger farms will survive.

“I don’t know I can say I know of a farmer out there who says I want another government payment,” said Fuchs.