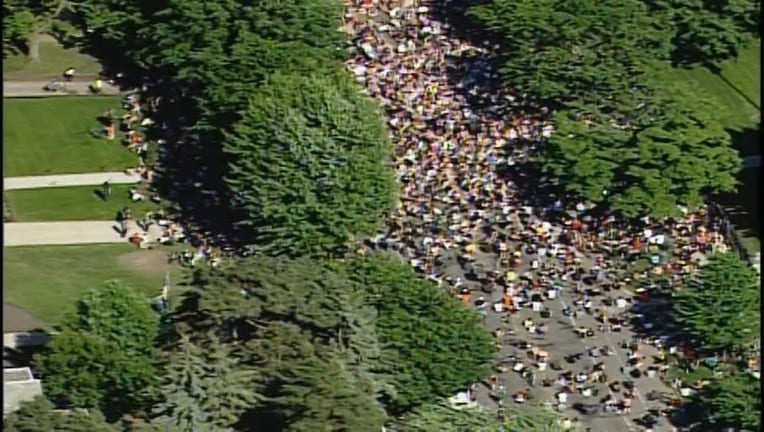 Thousands gathered on Summit Avenue across from the Governor's Mansion in St. Paul for a peaceful protest Monday.

ST. PAUL, Minn. (FOX 9) - Approximately 2,000 people gathered for a peaceful protest outside the Governor’s Mansion in St. Paul Monday afternoon and hundreds of them went to the State Capitol afterwards.

A fraction of those protesters were arrested after curfew at the State Capitol later Monday night.

St. Paul Police says the large protest was peaceful, but it closed Summit Avenue between Lexington Parkway and Victoria Street to ensure the safety of the protesters at the Mansion.

The Police Department said more than 2,000 gathered on Summit Avenue for a peaceful protest.

Protesters called for more aggressive charges against now former Minneapolis Police Officer Derek Chauvin in the death of George Floyd on Memorial Day. They also chanted "All Four" to highlight their desire to see charges filed against all four officers involved in the arrest that led to Floyd's death.

A number of St. Paul Police officers and State Patrol deputies were seen kneeling in solidarity with the protesters at the scene, too. 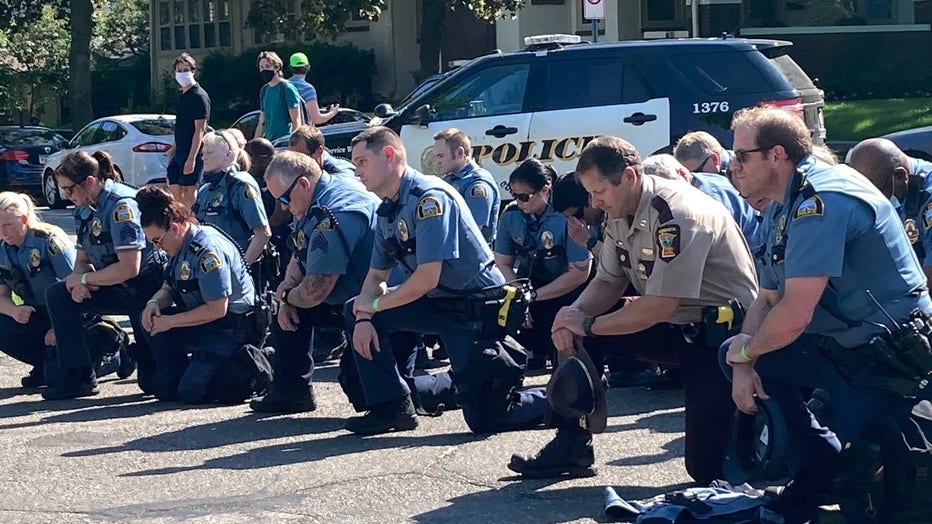 Gov. Tim Walz was seen mingling with protesters and community activists outside the mansion. He spoke with some organizers before heading back inside.

The protest concluded at 6:30 p.m. and police escorted two groups totalling 500 protesters as they moved toward the State Capitol.

State Capitol protesters were greeted by a National Guardsman who leveled with them and said he was with them as they protested the death of George Floyd.

Upon arrival, protesters heard from a National Guardsman who offered a message of understanding. At the end of his brief remarks, the crowd applauded the man and continued on with its demonstration.

Demonstrators lingered at the scene up until the 10 p.m. curfew Monday night, but in much smaller numbers.

Just after curfew Monday night, police began making arrests outside the State Capitol. The protest had dozens of participants when the arrests began.

The Department of Public Safety announced the curfew arrests after the 10 p.m. curfew Monday night.

This is a developing story. Check back in with FOX9.com and the FOX 9 App for the latest.