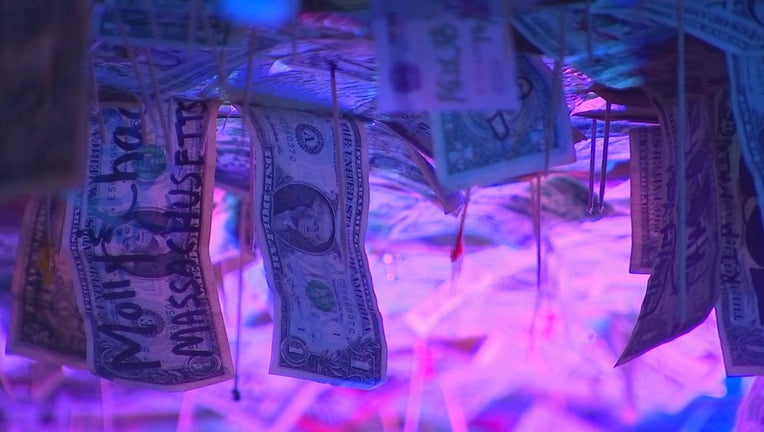 Workers at The Nook took down a portion of the dollar bills to donate them to the Alzheimer's Foundation.

ST. PAUL, Minn. (FOX 9) - The Nook in St. Paul’s Macalester-Groveland neighborhood is known as a small place with big burgers and one dollar bills.

“It’s kind of one of those, you put up a dollar bill and it says that you were here,” said Michael Runyon, a co-owner of The Nook.

The Nook plans to donate over $6,000 that was pinned to the ceiling, walls

Thousands of dollars once pinned to the walls of The Nook are now going to a good cause.

Runyon says it's a tradition that began a decade ago by a regular named Maggie who was moving overseas.

“She put up a dollar and said, ‘I’m going to keep this in case I’m thirsty when I get back at least I have a dollar,’” said Runyon. “Well it stuck up there and people started adding since then.”

The basement ceiling and walls became littered with cash as customers literally left their mark. Now, those dollars will soon be making a difference.

“I think it’s just a way to kind of give back,” said Runyon.

Pulling back tape, toothpicks and thumbtacks, restaurant staff recently spent hours removing more than $6,000 dollars from one side of the room. The money will be donated to the Alzheimer's Foundation.

“We have a lot of family and friends who have had [Alzheimer’s],” said Runyon. “It’s just one of those crippling diseases where nobody really knows the answers behind the whole thing.

It’s an act of kindness rooted in tradition.

“We don’t want a lot praise for this whole thing,” he said. “We just want to make sure that it gets into the right hands.”

The ceiling and walls of The Nook may be partially bare, but there's already signs of growth.

“It’s not ours and so I feel like it’s just a feel good cause that everybody can kind of say, ‘Hey I gave a dollar to that, I feel good about that, yeah.’”