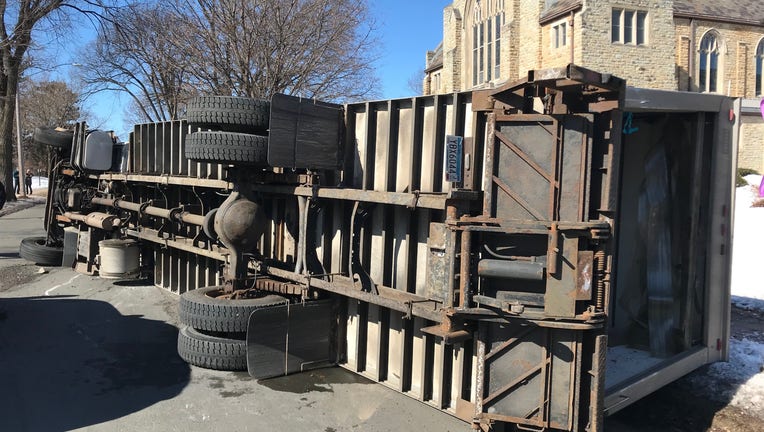 This was the end result of Friday's truck theft and crash in Minneapolis. (FOX 9)

MINNEAPOLIS (FOX 9) - Two teenagers went for a drive and left behind a trail of destruction in Minneapolis on Friday.

Police say they stole a large truck and went for a joy ride across the city that damaged at least 20 cars.

Two teenagers went for a drive and left behind a trail of destruction in Minneapolis on Friday.

"The trail of destruction," said Gagliardi. "It's been quite the day."

Gagliardi uses her Toyota Corolla to get around, but she's not going anywhere after two teens on a joyride sideswiped her car and took off.

"I heard it," she recalled. "I was in the living room and I heard the crash and my car's alarm went off and I got out here within two minutes and the person was gone."

Minneapolis police say two 15-year-old boys stole a truck that was left running with the keys in the ignition near the Hennepin County Medical Center Friday morning.

Investigators say for the next several hours, the teens drove around the city, intentionally smashing into parked cars until the driver tried to turn the corner at 49th and Nicollet and flipped the truck over on its side.

"We need people's help," said Minneapolis police spokesperson John Elder. "Stop leaving your keys in your car. Again, nothing but luck kept us from having someone seriously injured or killed today."

"The whole rear-end was smashed in," said Kyle Viazcan. "It went up to the middle of the sidewalk basically."

Viazcan got a call from his brother saying his car had been hit too. Viazcan and his girlfriend followed the trail of debris and found six other cars that had been damaged in the same neighborhood. Police say the number is at least 20 that they know of.

"That was a surprise when we found out they were kids that took a big truck and went on kind of a rampage, I guess," said Viazcan.

Gagliardi's husband's pickup was hit as well, but the damage was minor. She is just grateful she wasn't in the car when the teenagers' wild ride came down her street.

"Thank god for my life because, five minutes earlier, if they would have crashed into me when I was in the car I would have been injured, at least," she said.

The two boys are now facing charges of auto theft, tampering with a motor vehicle, hit and run, and damage to property.