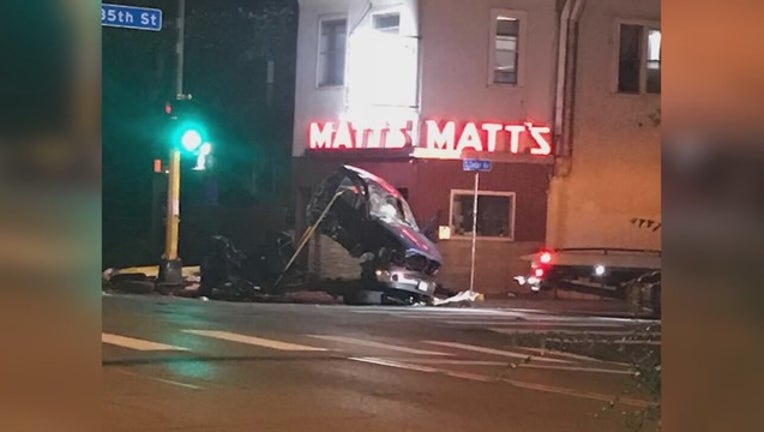 MINNEAPOLIS (FOX 9) - The 18-year-old man who killed three people in a crash outside Matt’s Bar in Minneapolis while trying to run from state troopers last fall was sentenced to 390 months, or 32.5 years, in prison Wednesday.

The Minnesota State Patrol said Hodge stole an SUV and took when troopers tried to stop him. Troopers called off the chase, but Hodge kept speeding down Cedar Avenue, slamming into a pickup truck outside the restaurant and killing all three people inside.

Four other teenagers inside the stolen SUV were also injured. Investigators say Hodge admitted to smoking marijuana and did not have a valid license.

Wednesday's sentencing proved to be emotional as family members for the victims shared their overwhelming grief.

“My dad is never going to be able to walk me down the aisle,” said Lindsey Carpentier, daughter of Kenneth Carpentier.

For 15 minute, the raw emotion poured out in the 14th floor courtroom as 18-year-old Hodge looked on, looked down, and sometimes broke down.

The family of the three people he killed at 35th and Cedar in September, 64-year-old Kenneth Carpentier, 65-year-old Sheryl Carpentier, and 48-year-old Kim Gunderson vividly painted a picture of their pain.

“Will heal some of this wound but we will never truly be whole again because her absence has changed us forever,” said Christine Groenke, Kim’s cousin.

The three were headed home from a south side neighborhood reunion when Hodge, fleeing police in a stolen vehicle, hit their pickup going between 85 and 92 miles an hour.

The judge told Hodge that he had plenty of time to choose to stop fleeing but kept going.

“As one of you said, you’re working on healing and peace and resolution in your hearts,” said Judge Jamie Anderson. “My prayers that comes quickly for you.”

Hodge offered a short apology, saying, “I never in my 18 years of life thought my actions could lead to the deaths of three people and for that I am sorry.”

Carpentier’s son Anthony wasn’t buying it. “No, he’s sorry he got caught. He’s not sorry what he did.”

The earliest Hodge will be eligible for parole is after serving more than 21 years when he’ll be just shy of turning 40.