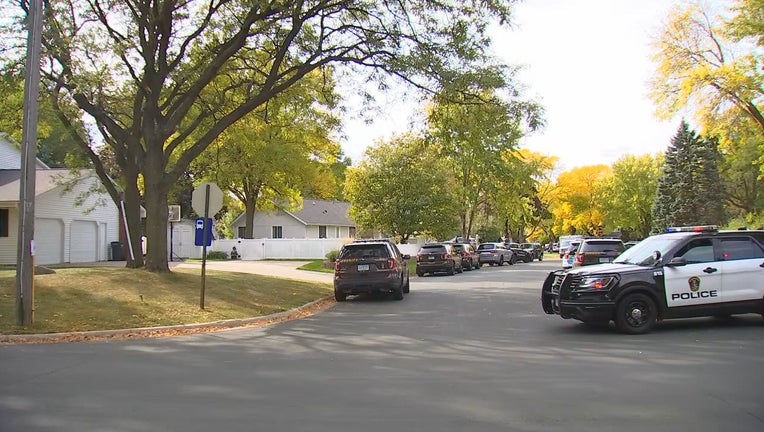 Police have blocked off Brunswick Avenue in Bloomington for a police investigation. (FOX 9)

BLOOMINGTON, Minn. (FOX 9) -  Police say a suspect has surrendered after an hours-long standoff that started after shots were fired as U.S. Marshals attempted to serve a warrant.

For hours on Friday afternoon, the area near Brunswick Avenue South and 106th Street West was been blocked off for the investigation.

A large police investigation is underway in Bloomington after officers say shots were fired while U.S. Marshals attempted to serve a warrant.

"People say 'not in my neighborhood,' and I guess that’s what I say right now, but it can happen anywhere," said Tchaikousky Rogers.

Rogers was just trying to bring ice cream home to her granddaughter and found she couldn’t get back to her apartment on Brunswick Road. The entire neighborhood had been blocked off by law enforcement.

“We responded out here to assist the fugitive task force on a situation where there had been some shots fired,” said Bloomington Police Chief Jeff Potts. “It’s our understanding they were attempting to pick up an individual on a warrant.”

The police chief in Bloomington tells us his officers came to help the U.S. Marshals just after 2 p.m. when those shots were fired. Officials said the marshals were working to serve a warrant at the residence. Police called in SWAT teams and reinforcements after shots were fired but the suspect remained in his apartment.

A neighbor who lives just a few doors down described the chaotic scene inside.

"I stood by the door and was listening and I peeked my head out, and they said get back inside and we went back in and the next thing you know you hear the shots fired off and everyone screaming," said neighbor Alex Mountjoy.

Multiple agencies were on scene from the afternoon into the evening, evacuating those who live in the building and offering warm buses for them to wait in. Just after 11 p.m., police said the suspect was in custody and neighbors would be allowed back into their homes.