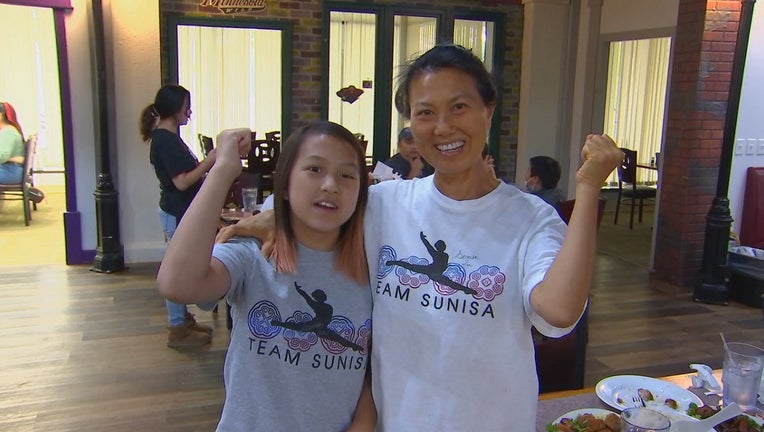 ST. PAUL, Minn. (FOX 9) - Winning a gold medal on Thursday will be an unforgettable moment for St. Paul’s Suni Lee and her family but it’s almost making waves in St. Paul's Hmong community.

Thursday morning, Sunisa Lee won gold in the women's artistic individual all-around event. The moment was not only a big moment for Lee and her family but the Hmong community in St. Paul as well.

Suni Lee's family celebrates as she wins gold in Olympics

The family of Suni Lee erupted on Thursday during a watch party in Oakdale, Minnesota as Lee took home the gold medal in the women’s gymnastics all-around gold event. Nicole Marie King via Storyful

"It was amazing," said fan Kaitlin Lor. "I was super excited she got to represent the Hmong community."

Unison Restaurant is a relatively new hangout for St. Paul's Hmong community. But, customers are head-over-heels over for Lee.

"A while ago, my parents I sat down at a restaurant and I actually saw Suni on a newspaper and that's what inspired me to do gymnastics from that day on," added Lor.

"This medal means a lot to me because there were a lot of times that I wanted to quit and I didn't think I would ever get here," said Lee.

For many in the Hmong community, it was a watershed moment that unleashed a flood of tears.

It was a special day for Suni Lee and her family as the St. Paul native won gold at the Olympics.

"To be one generation from living in a refugee camp to be standing on a podium in front of the whole world stage with her gold medal," said community organizer Tou Ger Xiong. "So it was very emotional."

"I cried actually," added Dr. Maykao Hang with the University of St. Thomas. "I was just so proud of her. Proud of the Hmong community, proud of Minnesota."

Some Hmong Americans say they feel invisible in the United States and watching one of their own in the Olympic spotlight makes them feel like they are finally being seen.

"It's a land of opportunity but sometimes access and opportunity is just too far for some of our communities to reach and we have one that did," added Dr. Hang.

Lee's Olympic journey isn't over just yet and many in the Twin Cities Hmong community believe she will stick the landing.

"I hope to see more from her," said Lor. "I think it’s going to really show the world what the Hmong community is all about."