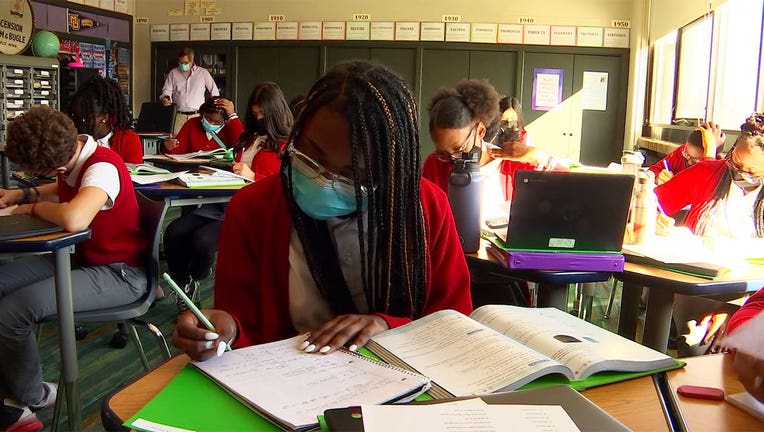 MINNEAPOLIS (FOX 9) - In the race to begin the day on the north side of Minneapolis, there’s a starting line that forms long before many are even out of bed.

Follow the taillights in the crisp early morning air and chances are, many are heading to the corner of Dupont Avenue North and North 18th Avenue.  It’s well before 7:30 a.m., and those jumping out of their cars in a sprint to the finish line at the front door are all children.

In the race to begin the day on the north side of Minneapolis, there’s a starting line that forms long before many are even out of bed.

Welcome to another day at Ascension Catholic School.

Ni-Kia like her classmates race through the halls wearing their red sweaters to make it to class by 7:45.  Across the rest of the Twin Cities, the coffee has yet to start brewing in many offices.  But at Ascension, this is just another day of learning, another day of striving in a school that dates back more than 100 years.

"We have about 280 scholars here at Ascension," said Principal Benito Matias.

The reference to his students as scholars is intentional, a change in the mind frame for everyone to understand what happens in his classrooms is academic, explorative, and life changing.

"And truthfully, just makes sense," explains Matias.  "In terms of high expectations, in terms of relationship, in terms of how we want to communicate really the way that we look at what it is that we want as outcomes, it's natural for us to call them scholars."

Ni-Kia is one of those outcomes that her principal is talking about.  She lives in Robbinsdale and transferred to Ascension two years ago.

"I didn't like reading when I was at my other school because they didn't really enforce it.  So I was like, I don't have to read," recalled Ni-Kia.  "So then when I came here, you had to read.  And I came like a better reader over the years. And I've seen that in my testing scores."

Ascension's ten-year average for its 8th graders is a 70% proficiency in math, 66% in reading.  The scores far outpace the proficiencies among students at neighboring schools within the Minneapolis Public School District.  Since 2013, all of Ascension’s eighth graders have gone on to graduate from high school.

"You know, a lot of folks want to know what, what's the secret sauce? And I wish that there was a secret sauce," said Matias.

He makes the point that with the direction of Ascension’s teachers, it’s their scholars that are doing all the hard work.  And there’s more to do.

"We're not where we want to be with all of the success that Ascension has had, and over 130 years being in this neighborhood and on this block, it's not easy," emphasized Matias.

If anyone knows, Matias does.  He is a product of Minneapolis Public Schools.  He graduated from Franklin Middle School, Patrick Henry High School, and later became a teacher at MPS.  He’s been the principal of Ascension since 2016.

"We talk a lot about relationships here at Ascension," said Matias.  "And that makes such a difference when you know that somebody cares about you when you have somebody who will hold you accountable when you don't make the best choices, which on occasion growing up, I did."

But Matias is not the only son of North Minneapolis who’s come back home to work at Ascension.  Quentin Moore finished 8th grade at Ascension and went on to graduate from the University of St. Thomas.  He is now the Ascension Academy’s director of advancement.

"I have a sacred place in my heart for Ascension," said Quentin Moore.

Moore’s job is to raise the support to make it affordable for parents to send their children to one of the three Ascension Academy Schools, Ascension Catholic School in North Minneapolis, St. Peter Calver in the Rondo neighborhood of St. Paul, and John Paul II School in Northeast Minneapolis.  The published tuition at Ascension is more than $1400, but most families pay less than $200.  To give families that opportunity is what drives Moore.

"I’m a man of faith.  And so to be able to express those values are also important," said Moore.  "And I also know that it truly changes the lives of our scholars who walk through these halls."

It’s especially important to work in North Minneapolis where there are persistent disparities.  More than 90% of Ascension’s enrollment are students of color.  In recent years both education and community leaders talk about the education gap among White and Black students.  Matias says they are working to close that gap one scholar at a time.

Ni-Kia Madison believes she can.  She beamed with a wide braces-filled smile when she proudly revealed that she was just accepted to attend high school at DeLaSalle in Minneapolis.

"Really excited," beamed Madison.  "My mom is really happy. She's proud of me. You know, she knew I could do it."

All at a school in North Minneapolis that gets started well before many businesses across the Twin Cities.

"This sets the bar for like, you know, people from the north side that you can do it," said Madison.  "You can make it out of there if you want to.  You can be successful.  You can be anything that you put your mind to."