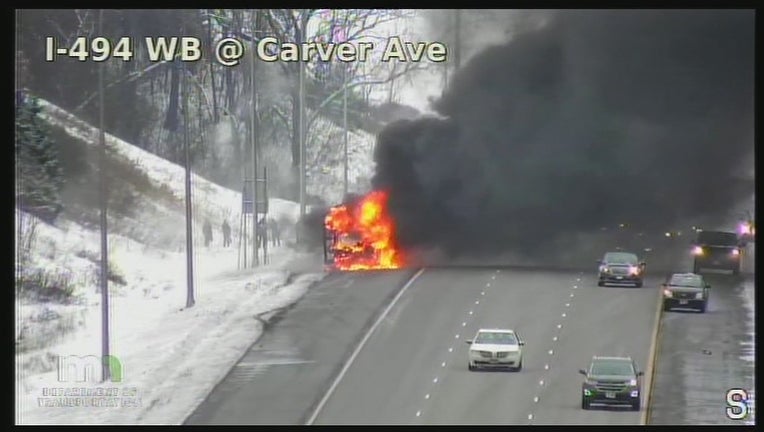 Officials respond to a bus fire on I-494 in Woodbury, Minnesota Monday afternoon.

(FOX 9) - More than a dozen middle school students are safe after their school bus caught fire Monday afternoon on I-494 in Maplewood, Minnesota.

According to a release from Richfield Public Schools, at about 3:30 p.m., a school bus transporting the Richfield Middle School seventh grade boys basketball team to a game in Maplewood caught fire. The driver smelled smoke and saw smoke coming in through the bus vents. He immediately pulled over and evacuated the bus.

No injuries after school bus catches fire in Maplewood, Minnesota

A school bus carrying a middle school basketball team caught fire in Maplewood, Minnesota. Luckily, no one was injured.

Seventh grader CJ Armstrong was one of the middle school students on the bus.

“We were riding on 494 and going to our basketball game and the front just started smoking. And then we saw the fire, and my friend opened the back door and we all ran to the back and jumped out,” he said.

“I look up at the front, I see this big gray cloud following me through the bus… I hear everyone say, ‘hey it’s a fire, it’s a fire,’ so then they open up the latch and I start pushing people out. I’m kind of scared, my heart is racing and basically we start running,” added Jayden Anderson, another teammate on the bus.

“We were freaking out. This never happened to us before so we didn’t know what to do,” added teammate Derrick Brown.

Officials said a second school bus returned students and staff to Richfield Middle School where students were met by their families.

A school bus burst out in flames along 494 near Woodbury, Minnesota on Monday. Video Courtesy: Mike Kazmerski

“We are extremely grateful that there were no injuries and that our driver was able to quickly and calmly evacuate students,” said Superintendent Steven Unowsky. “His swift and decisive actions ensured students and staff were safe.”

“The driver has been with our transportation department for 18 years and is well known by many of our students and staff from across the District,” said Dan Kretsinger, Director of Facilities and Transportation.