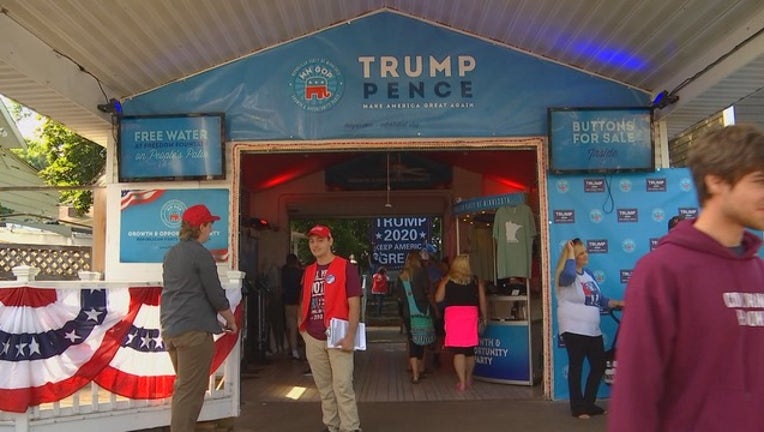 Leaders of the DFL and GOP in Minnesota say the discourse at their State Fair booths has been ugly this year.

FALCON HEIGHTS, Minn. (FOX 9) - The heads of Minnesota’s two major political parties say they’ve been targeted over the 12 days of the Minnesota State Fair, leading both parties to install security cameras inside their booths for the first time as the political discourse frequently turned ugly.

Amid the hyper-charged national political atmosphere, Republican and Democratic party leaders said the incidents happened almost daily. Party officials said fairgoers have hurled items at volunteers, while the head of the state GOP said someone dumped trash on her at the Republican booth last week.

State Fair Police said they continue to ask for the public’s help in identifying a woman who may have been involved in a sexual assault at the Republican booth on Aug. 23 in which a GOP volunteer reported being victimized.

“This fair is supposed to represent the best of Minnesota, not the worst,” Ken Martin, chairman of the Minnesota DFL, said in an interview outside his booth. “We just have to find a way to de-escalate this. It’s sad that this is where our politics have gotten to.”

Beyond the Aug. 23 sexual assault, neither party has filed any additional police reports, said Brooke Blakely, a spokeswoman for the State Fair Police.

Martin said Democrats decided to install surveillance cameras inside their booth for 2019 because of incidents in previous years. GOP Chairwoman Jennifer Carnahan said her party also put cameras inside its booth for the first time, after installing them on the outside of the booth years ago.

“Every day at our booth, (things happen),” Carnahan said. “People will spit on our volunteers in their faces, people will take beer and dump it over our merchandise. I had a woman take garbage and throw it in my face last Wednesday and tell me I was trash.”

For years, the parties use their State Fair booths to interact with potential voters. The spaces allow fairgoers to meet candidates, sign up to volunteer for campaigns, and buy GOP- or DFL-themed merchandise.

Both party leaders expressed concern about what 2020 will bring. The fair is scheduled to start Aug. 27, the last day of the Republican National Convention in Charlotte, when tensions will ramp up heading into the fall campaign.

The two party officials said they respected the other, and agreed that both leaders were examples of “disagreeing without being disagreeable.”

“We have to model the type of behavior we expect out of everybody else,” Martin said. “If our leaders can’t do that, we can’t expect other people to do that.”

Carnahan said President Donald Trump should not be blamed for the ugly turn in national discourse. She expressed doubts about what the heads of the parties could do to lead a turnaround.

“As party chairs, there’s only so much we can do ultimately,” Carnahan said. “People are free citizens and are able to do what they want. When he (Martin) and I are out there encouraging people to be civil and to disagree but not be disagreeable in a negative way, it’s hard to say what else can we do about it in Minnesota.”

The sexual assault investigation remains open. Blakely said State Fair Police have no updates in the case since sharing the photo of a person of interest late last week.

Carnahan said she was a few feet away from the incident when it happened Aug. 23. She declined to explain the nature of the sexual assault, deferring to the privacy of her volunteer, but called it “egregious.”

“If it had happened to anyone’s sister or mother or daughter, anyone would’ve been appalled by it and taken action,” she said.