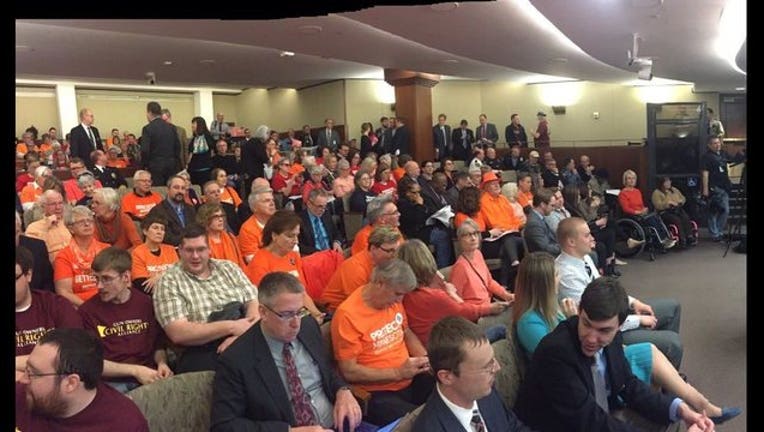 ST. PAUL, Minn. (KMSP) - The full Minnesota House may soon vote on a bill expanding the right to use firearms to protect yourself. Often called a Stand Your Ground law, HF 238 would legalize the use of deadly force if a person feels their life is threatened, or in the defense of a crime in one's home.

The bill had a hearing earlier this month in the House Public Safety Committee and was re-introduced Tuesday with no testimony. The bill passed on a 9-6 vote.

Stand Your Ground still faces an uphill battle in the Minnesota Legislature. So far, it has not received a hearing in the Senate, and Gov. Mark Dayton vetoed a similar bill in 2013.

Subd. 3. Degree of force; retreat. Authorizes an individual to remain in any place the person has a legal right to be and use all force and means to succeed in defense against attack. Force need not be proportional to the attacker’s force, as long as the person’s objective is defense. Allows a person to continue defensive actions against an assailant until the threat ends.

Subd. 4. Presumptions. Creates a presumption that a person entering or attempting to enter by force or stealth into a person’s dwelling or occupied motor vehicle is doing so with the intent to use life-threatening force. Allows for the use of defensive action if an individual or another person is being removed by force from a dwelling or occupied vehicle. This presumption does not apply if the person against whom force is being used is a lawful resident of the dwelling or a lawful possessor of the vehicle, or has lawful custody of the person being removed from the dwelling or vehicle. A person who is prohibited from contacting the individual or from entering a dwelling or possessing a vehicle of the individual is not considered a lawful resident or lawful possessor of the individual’s dwelling or vehicle. Denies criminals the right to use defensive force and prohibits the use of defensive force against peace officers involved in lawful conduct.

Subd. 5. Criminal investigation; immunity from prosecution. A person justified in using deadly force under this act is immune from being criminally prosecuted, and may be arrested only after law enforcement agents have considered claims or circumstances supporting self-defense.

Subd. 6. Justifiable use of force; burden of proof. Requires the state to prove beyond a reasonable doubt that a defendant’s use of force was not justifiable.

Subd. 7. Short title. “Defense of Dwelling and Person Act of 2017.” Effective date. August 1, 2017, and applies to use of deadly force occurring on or after that date.