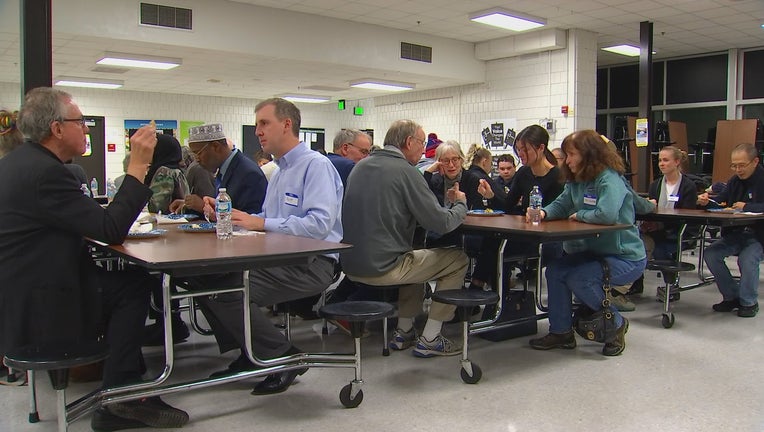 Neighbors in Highland Park in St. Paul gathered for a "Night of Peace and Goodwill." (FOX 9)

ST. PAUL, Minn. (FOX 9) - In a time of divisiveness, a neighborhood in St. Paul is spending the night getting to know each other. No matter your religion, ethnicity or beliefs, organizers say it's a chance to simply bring people together.

People of all backgrounds gathered at Highland Park Senior High School Wednesday for a “Night for Peace and Goodwill.”

“Our world is hungry for peace and the first step is people have to talk to each other so that’s what are here to do,” said Paul Langenfeld, an organizer and member of the Highland District Council.

“I want to learn about different cultures and religions and meet new people,” said Mac Franklin, who lives in the Highland Park Neighborhood.

Most of those attending didn’t know one another before the gathering, but they say they want to change that.

“We need to know and learn from one another and learn who we are. We cannot be strangers to each other,” said Farhiya Abdi, a speaker at the event.

The conversation started around food with a Minnesota potluck with all cultures represented.

“I wanted food to be part of this event it makes no sense for it to be a lecture or make it academic, I wanted people to relate to one another and the way you do that is by sharing a meal,” said Langenfeld.

Then over the meal, the conversation turned to religion.

“The reason Judaism spoke to me and the reason I became a rabbi is mainly because they didn’t see rabbis like me,” said Rabbi Jeremy Fine of the Temple of Aaron.

The hope is the event is the seed of change, reaching one neighbor at a time.

“Maybe because of this night they have the comfort and confidence to say hello, so if that spreads we’ve made a difference,” said Langenfeld.