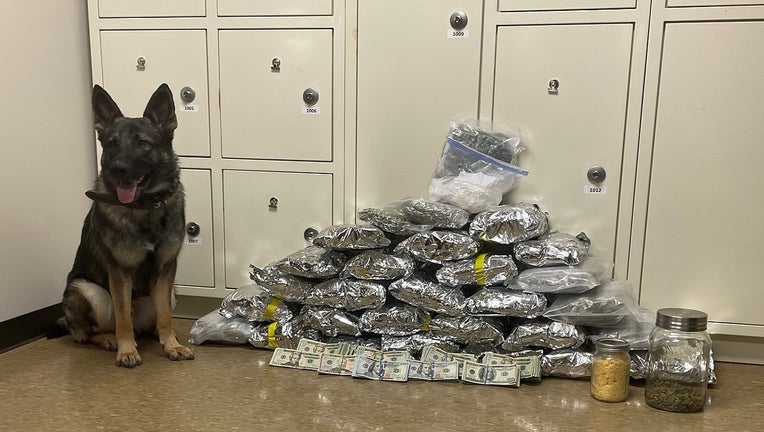 Pictured is the new K-9 graduate Maverick next to his findings on his first day of work. (Photo credit Renville County Sheriff’s Office)

RENVILLE, Minn. (FOX 9) - A K-9 with the Renville County Sheriff’s Office had an eventful first day of work after he helped locate a substantial amount of drugs and thousands of dollars in cash.

During K-9 Maverick's first day of work, the sheriff's office said the new K-9 joined deputies and other law enforcement members to help execute a search warrant in Renville on Wednesday morning.

During the search, Maverick alerted his handler to a package that contained over a pound of cocaine. Officers also recovered a large amount of marijuana.

In a Facebook post, the sheriff’s office said that Maverick and his handler had just completed a 14-week full-time intensive training, including drug detection. Wednesday was the first day the pair started working together in Renville county.

Law enforcement said one person was taken into custody during the search. They have not been officially charged.