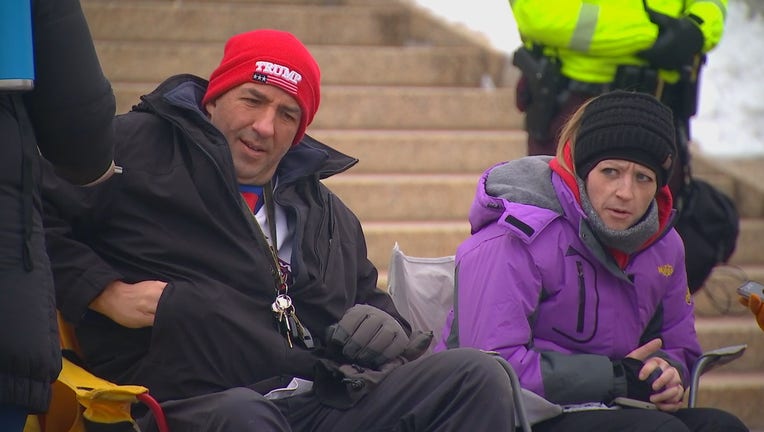 ST. PAUL, Minn. (FOX 9) - It was another quiet day at the Minnesota State Capitol Sunday despite some law enforcement agencies warning of possible armed and violent protests at government buildings.

A permitted event wrapped up in St. Paul around 2 p.m., but some law enforcement presence was visible into the evening, including some road closures. The added security stemmed from the attack on the U.S. Capitol about a week and a half ago.

Security forces overwhelmed a small gathering of President Trump supporters outside the Minnesota capitol on Sunday...

A pro-Trump group held a demonstration Sunday, saying they were there to pray for elected officials. A handful of people showed up, but there were no speakers, there was no schedule, there was no program or any chanting. The event was mostly people sitting in some lawn chairs in front of the State Patrol, who were stationed on the Capitol steps.

Organizers of the event said they expected a small crowd.

"It’s interesting when you tell everybody to stay home if they plan on causing problems you only get five people," said Becky Strohmeier, an organizer with "Hold the Line." "It’s very telling of a lot of people.  But no we didn’t especially advertise this day. We didn’t really tell people to come we told them the opposite – not to come."

A few counter protesters showed up Sunday as well, but there were no clashes between them and the pro-Trump group.

Strohmeier said at Saturday’s events, there was at least one counter-demonstrator who was confronting the pro-Trump group holding their event. Words were exchanged but nothing turned violent.

Law enforcement was prepared for a big crowd, with about 100 Minnesota National Guard members called in to help with security around the Capitol. Some were stationed in armored vehicles around the grounds and there were dozens of State Patrol members, too.

Public Safety Commissioner John Harrington said Friday there are no credible, immediate threats to the Minnesota State Capitol, however, there will still be increased security around the complex ahead of planned protests this weekend and through President-elect Joe Biden’s inauguration next week.&nbsp;

Friday, the Minnesota Department of Public Safety said it wanted to be prepared, but had not received any credible threats against the Capitol.

The organizer of Sunday’s demonstration was involved with and organized events both at the Capitol and at the Governor’s Residence over the last few months. When asked if the demonstrations will continue after Inauguration Day, she said she is taking things one day at a time and that the future of the group’s events will depend on what happens in Washington, D.C. this week.