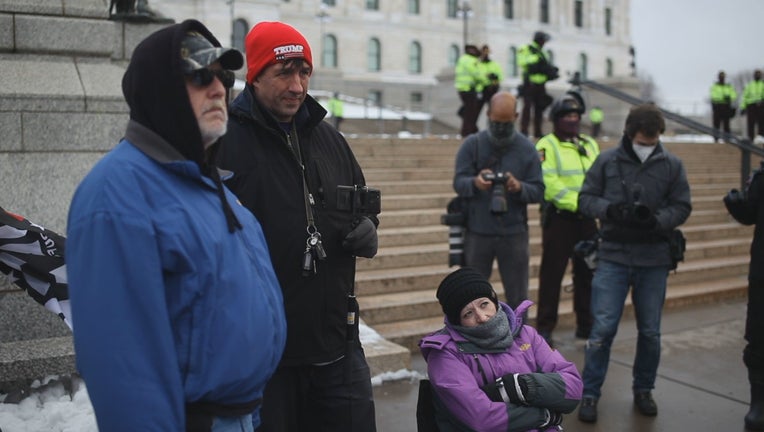 Members of the pro-Trump group stand outside the Minnesota State Capitol building on Saturday, January 16, 2021, as law enforcement stands guard in the distance. (FOX 9)

ST. PAUL, Minn. (FOX 9) - A group rallying at the Minnesota State Capitol in St. Paul on Saturday was met with a large show of force by law enforcement agencies, amid safety concerns across the country.

The extra law enforcement didn’t stop the small group of pro-Trump supporters from what has become a weekly gathering of speeches and prayer, dubbed "Freedom Fest."

The extra law enforcement didn’t stop the small group of pro-Trump supporters from what has become a weekly gathering of speeches and prayer, dubbed Freedom Fest.

"We’ve had a lot of negative press lately," said Hold the Line organizer Becky Strohmeier. "The governor trying to fit us into a false narrative that we’re violent."

Strohmeier insists she didn’t expect a huge crowd Saturday and few showed up. Some were visibly armed while others were toting signs that read "Stop the Steal."

"I just wanted to come out and challenge people to tell me how the election I participated in was stolen," said Steve Brandt of Minneapolis.

Brandt, who said he was an election judge in Minneapolis, said enough is enough.

"And people call into question the process you work in, you feel the need to stand up for democracy, say 'no this is wrong,'" he explained. "This election was not stolen."

Following the recent, violent assault on the U.S. Capitol, and with Joe Biden’s inauguration days away, security is ramped up at statehouses and federal buildings across the country.

Strohmeier, who has also organized an outdoor Sunday church-style event for the capitol grounds, isn’t sure what the future holds for the movement beyond that.

"It’s really hard to know what we’re going to do next weekend," she said. "It kind of depends on what happens this week. We’re not going to stop being quiet all of a sudden." 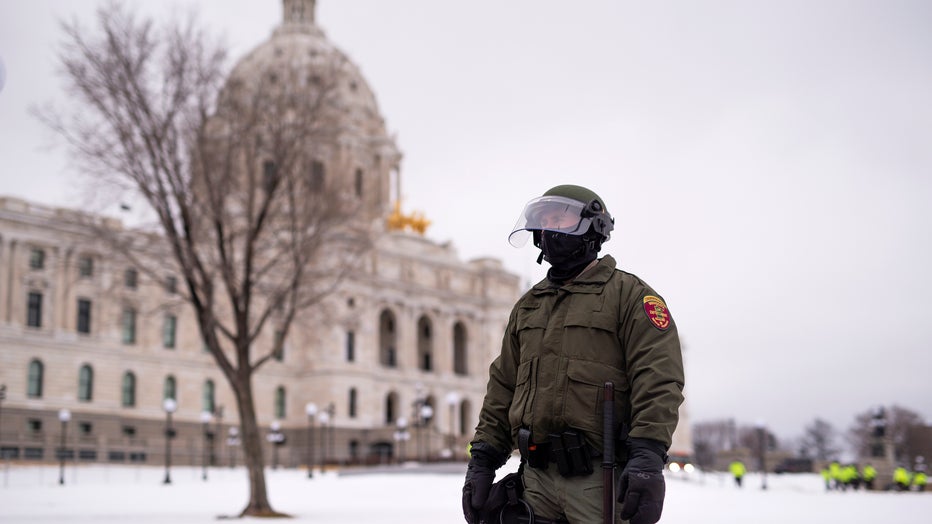 ST PAUL, MN - JANUARY 16: A Conservation Officer with the Minnesota Department of Natural Resources forms a perimeter before a protest scheduled outside the Capitol building on January 16, 2021 in St Paul, Minnesota. Supporters of President Trump gat

DPS says some of the security measures will be visible to the public, but not all. People should expect to see State Patrol troopers, Department of Natural Resources conservation officers and National Guard soldiers patrolling the Capitol. The fence that was put up around the Capitol during the unrest over the summer remains in place.

Minnesota National Guard Adjutant General Shawn Manke said Friday a little more than 100 military police will be at the state Capitol initially, but the response can be "scaled" based on the threat level. There will also be traffic restrictions in place around the Capitol. Foot traffic will be allowed, but only state agency employees, contractors, deliveries and those with official state business will be able to drive in the restricted area.

The Minnesota Department of Public Safety is asking people who do not have a planned activity or business at the Capitol to consider visiting at another time, according to a news release.