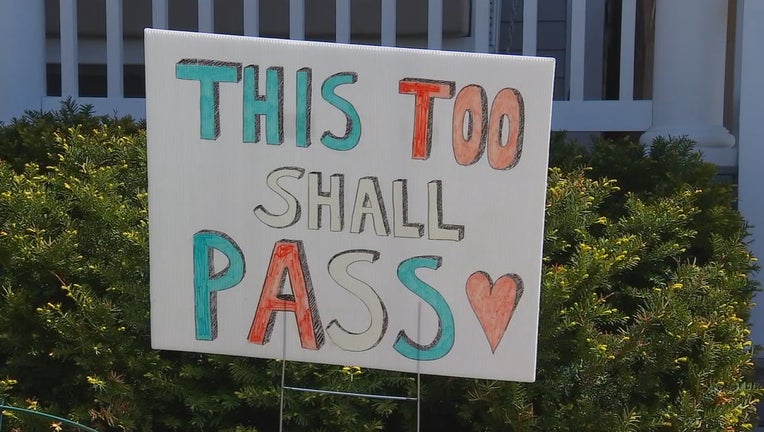 NEW PRAGUE, Minn. (FOX 9) - Over the past few weeks, homemade signs have popped up all over New Prague. They offer support amidst the COVID-19 crisis but the real purpose hopes to help keep local businesses afloat.

"We started doing this but it grew to so many more people, the crew is probably 30 families or so," said Sarah Kallal.

Over the past few weeks, homemade signs have popped up all over New Prague

The project began with just her own four kids but has now grown to so many others.

It started with a simple idea in late April called "Signs of Support" to raise money for small businesses in New Prague. They put it on Facebook and sold 25 in the first four hours. A week later, it had raised $2,000 at $15 a pop.

"You know what, I think it’s amazing that everybody is involved in creating something, young and adults," said Jamie Bisek.

Sarah Kallal just wanted a way to support local shops and she found it.

"I think everyone who’s received a donation has broke down and cried because it’s just been so touching that everyone cares so much for us," agreed shopowner Janeil Dropik.

Dropik owns New Prague Floral. For her, Mother’s Day will help her numbers but, otherwise, businesses is gone because weddings and funerals are most of it.

"And without them doing any services and then, of course, we have to add up the dance recitals, the proms," Dropik added. "So it has been very hard on florists."

Dropik is one of a couple of dozen stores that money has already gone to. The signs can be seen all over New Prague, in the storefronts and on front yards.

The messages are varied but the purpose is singular and wildly successful.

"It’s been really cool," said Kallal. "It’s been fun to take the orders, add up the numbers and, you know, think how much good we’re doing."