EDINA, Minn. (FOX 9) - Some schools in Minnesota on Wednesday shut down access to a learning app after a link to an inappropriate image was shared via the platform in schools across the country.

"The circulation of inappropriate content and images in our school community is taken seriously and we understand concerns from parents/guardians that may have viewed such content prior to deletion. We will continue to prioritize the integrity of your child's communication tools," the message from Edina Public Schools said. 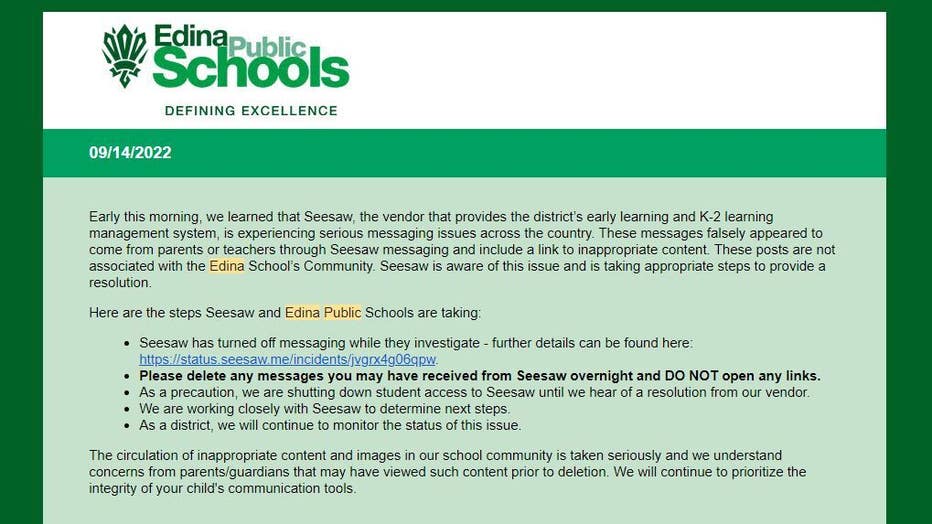 Edina Public Schools sent a messages to parents on Wednesday informing them of an incident involving the K-2 learning management system Seesaw. (FOX 9)

Seesaw addressed the issue in several statements on its website, saying late on Tuesday, Sept. 13, Seesaw was "subjected to a coordinated credential stuffing attack," adding Seesaw itself wasn't compromised. However, "isolated individual user accounts were compromised and used to send an inappropriate message."

Compromised emails and passwords that were reused in Seesaw were used to gain unauthorized access to Seesaw accounts, the company says. But there is no evidence the "attacker" accessed any data in Seesaw besides logging in and sending a message from the compromised accounts.

Seesaw turned off messaging within the app on Wednesday and turned it back on Thursday morning after it notified all impacted users and reset passwords of compromised accounts.