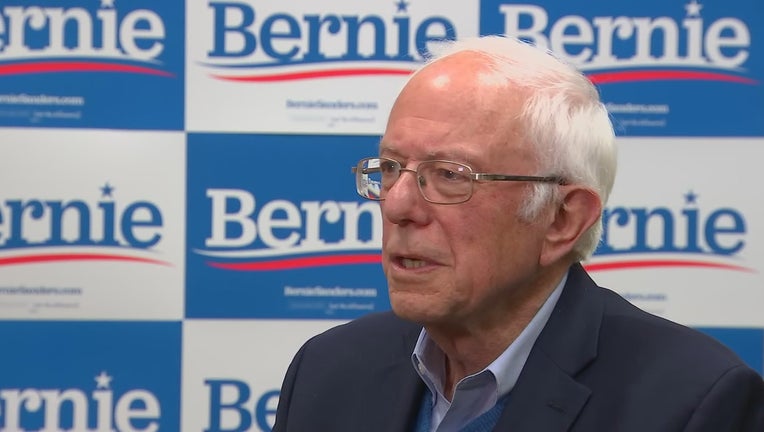 Klobuchar dropped out of the race Monday and had flown to Dallas to endorse Sanders' rival, Joe Biden, during a Monday evening rally. Pete Buttigieg, who dropped out Sunday, also endorsed Biden.

Bernie Sanders holds Get Out the Vote rally in St. Paul, Minnesota

Bernie Sanders held his Get Out the Vote rally in St. Paul, Minnesota just hours after Amy Klobuchar announced she is dropping out of the 2020 race.

"You think?" Sanders quipped in an interview with FOX 9, when asked about the apparent effort against him. "When you take on the establishment, you expect that opposition. We’re dealing with it, we’re going to win."

The chaotic movement in the Democratic primary is playing out less than 24 hours before Super Tuesday, when 14 states including Minnesota head to the polls.

The race in Minnesota was widely seen as a toss-up between Sanders and Klobuchar, and Sanders arrived in St. Paul to attempt a knockout to Klobuchar's chances in her own home state.

But Sanders attempted to smooth over any animosity between Klobuchar's supporters and his campaign.

"Amy and I obviously have our differences, but I think the views that we are fighting for are views that a lot of Amy’s supporters support," Sanders said in the interview.

He praised Klobubchar as "one of the hardest workers in the U.S. Senate" and said he was "in Minnesota to ask for the support of people who might otherwise have supported Amy."

Folk rock band Nathaniel Rateliff & the Night Sweats played a set at the rally and U.S. Rep. Ilhan Omar, who has endorsed Sanders, spoke on his behalf. Several thousand people filled the Roy Wilkins Auditorium at the RiverCentre for the rally.

When asked if he would consider putting Klobuchar in his cabinet if he wins the presidency, Sanders said it was too early to have the discussion.