After a shooting at the South Education Center in Richfield, one victim is dead while two others are injured, and two suspects are in custody in connection with the incident.

RICHFIELD, Minn. (FOX 9) - Police say they have arrested two suspects in connection to the shooting at the South Education Center in Richfield that left one student dead and two others injured.

Alfredo Rosario Solis, 19, and Fernando Valdez-Alvarez, 18, have both been booked pending probable cause murder charges, and are currently being held without bail. The two suspects were taken into custody after being apprehended by the Roseville Police Department Tuesday night.

Police responded to a shooting on the sidewalk outside the District 287 school on Penn Avenue shortly after noon on Tuesday.

At the scene police say they found two students had been shot, and both students were rushed to the Hennepin County Medical Center where officers say one of the students has since died. On Wednesday police confirmed a third victim was also injured.

After the shooting, police searched the school building as area schools were placed on lockdown before being reunited with their families. Multiple law enforcement agencies – including both the FBI and ATF – assisted throughout the process.

Police haven’t said if students had guns inside the South Education Center at any point, but in an unrelated incident a student brought a gun to the school in September. No one was hurt then, but the school district opted to get rid of its metal detectors before the start of the school year. It also eliminated onsite police officers, known as school resource officers – or SROs – working inside the schools in 2017, opting instead for what’s called "student safety coaches."

According to FOX 9’s Karen Scullin, school safety is now being reviewed.

Police have identified the fatally wounded victim as Jahmari Rice. As a student at the South Education Center, Rice was remembered fondly by the community at a memorial balloon release held to pay respects to Rice at St. Richard Catholic Church in Minneapolis on Wednesday.

Police say Rice was shot and killed after a dispute outside the South Education Center. A 17- and 19-year-old were also injured in the dispute.

After a shooting at the South Education Center in Richfield one victim is dead while two others are injured, and two suspects are in custody in connection with the incident.

Rice’s mother Shyrese James told FOX 9 that her son was being scouted by colleges to play football, and had just transferred to the South Education Center from Richfield High School in an effort to build school credit, so he would be ready when colleges came calling.

"He was trying so hard," James said.

"I have had the honor of knowing Jahmari for several years," said Christina Haddad Gonzalez, Richfield Public Schools Director of Student Support Services. "His smile was bright and spirit kind, generous and loving."

The statement also read, "While a senseless act of violence in our community and the loss of life are always traumatic, it is made worse by the fact that Jahmari once walked our halls, played on our sports fields, sat in our classrooms and was known and loved by many… The Richfield community is mourning. Students, teachers and staff who knew Jahmari are hurting. We are all feeling the impact of this traumatic event. It will take time to recover from this incident, but we will never forget Jahmari."

Rice is the son of local activist Cortez Rice who is currently being held in jail accused of threatening Judge Regina Chu during a protest ahead of the Kim Potter trial. 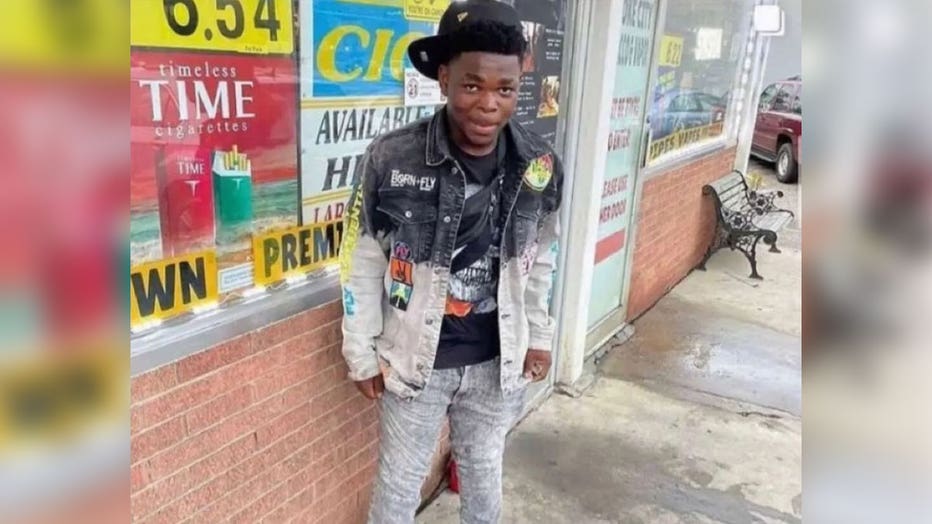 Many people in attendance demanded the temporary release of Rice in the wake of his son's death.

"Let him go so he can bury his child, let him go, he ain’t going anywhere," activist K.G. Wilson told FOX 9's Babs Santos in attendance.

As the community wrestles with what happened, they’re determined to remember the life that was stolen and to try to end the cycle of violence that is responsible for it.

Following the announcement of the shooting, Gov. Walz provided a statement Tuesday saying, "As a dad, I know that hearing of a shooting by a school is a parent’s greatest fear. Minnesotans deserve to know that when they send their kids to school, they will come home safely… My prayers are with the students, parents, and teachers whose confidence in that expectation has been shaken today. We need more than words, though – we need action. We need action to get guns off the streets and prevent violent crime in the first place. I remain committed to working with officials at all levels of government to seek needed change."

Classes were canceled both Wednesday and Thursday, with a statement posted by the district reading: "We express our deepest condolences to the family and friends of the victims. We are deeply saddened by this incident and will work to support the family, classmates and staff as much as we can… There are no words to describe the bravery exhibited by our staff at SEC and local authorities today. No one should ever have to respond to a tragedy like this and we commit to supporting staff, students, and family well-being as they recover from this incident… It is always difficult to understand an incident like this and it is an especially important time to reach out for support. District 287 stands ready to support our students and staff as needed as we recover from this tragedy."