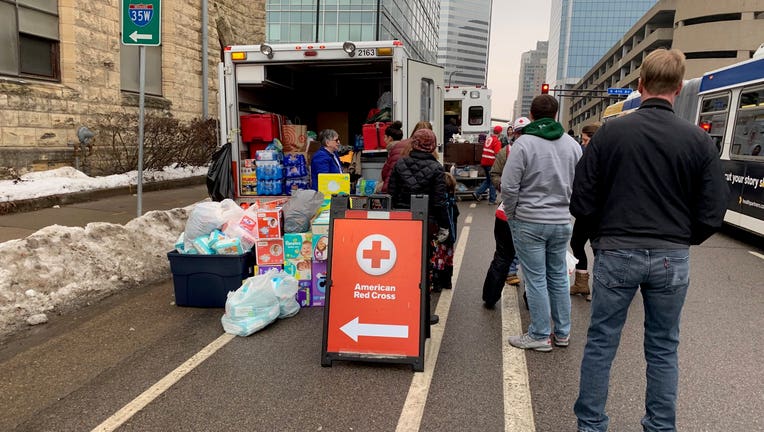 Donations lined the streets in Minneapolis after the Christmas morning fire at the Drake Hotel.

MINNEAPOLIS (FOX 9) - A day after closing its temporary shelter for Drake Hotel fire victims, the Red Cross is now doling out what remains of the donations.

The donations came in following an outpouring of support after the Christmas Day fire broke out, leaving dozens of families displaced. So much was donated that the Red Cross says, a month later, they still have plenty of stuff to give away.

A day after closing its temporary shelter for Drake Hotel fire victims, the Red Cross is now doling out what remains of the donations.

“Today, we can say that if you have a need and you can see it here, let’s fill your need,” said Red Cross Assistant Director of Operations Mark Steffer.

At Bethlehem Lutheran Church, there were tables upon tables of everything from diapers to blankets. The donations came from generous members of the Twin Cities community who, after hearing of the Christmas morning fire, ran out to bring anything they could to help displaced families. Hundreds of thousands of dollars were also raised to get families back on their feet.

“These are the donations that we got we back on Christmas Day and the first few days right after the fire that were warehoused and sorted and made available to clients at the shelter and hotels,” Steffer explained.

More than 200 residents were displaced by the Christmas Day fire. Mark Steffer with the Red Cross called the outpouring of generosity overwhelming.

“It really was an amazing response from the community and the number of agencies,” said Steffer. “The number of community advocates that stepped up to say ‘we want to help these people navigate a really difficult time in their life.’”

With the temporary shelter closing this week, Steffer says some people have found a new home and some are still searching.

“There’s more hope. The transition phase has been gone through and for most people now they’re on a third or second transition,” said Steffer. “But they’re closer to a permanent housing situation than they were about a month ago -- and for some even a week ago.”

Any donated items left after Friday’s distribution will be given to nonprofit agencies that support the homeless.