Timelapse of fire at Francis Drake Hotel in Minneapolis

A fire at the Francis Drake Hotel in Minneapolis, an overflow shelter for families experiencing homelessness, sent three people to the hospital and likely displaced more than 100 people on Christmas morning.

MINNEAPOLIS (FOX 9) - Firefighters responded on Christmas Day to a four-alarm apartment fire in Minneapolis that sent at least three people to the hospital Wednesday morning.

The fire started around 3 a.m. at the Francis Drake Hotel near 10th Street and Fifth Avenue South in the Downtown West neighborhood.

Firefighters are on the scene of a four-alarm apartment fire in Minneapolis that sent at least three&nbsp;people to the hospital Wednesday morning.&nbsp;

When crews arrived on the scene, the fire was burning on the second floor of the three-story brick building. Firefighters immediately started evacuations. Flames eventually spread to the third floor and attic, forcing crews to fight the fire from the outside.

How can you help the survivors of the fire? Click here for more information.

The Drake Hotel is a designated overflow shelter in Hennepin County for families experiencing homelessness. The building houses 250 occupants, but Fire Chief John Fruetel said it is unclear how many were actually in the building at the time of the fire due to the holidays.

“We're having a challenging time trying to account for everybody because we don't know who’s gone for the holiday so that'll be a little challenging," Fruetel said.

Officials placed displaced families on Metro Transit buses to keep them warm and out of the elements while they work to find them permanent shelter.
Mayor Jacob Frey called the fire “heartbreaking.”

“These are people’s lives. This is their home. They’re concerned about everything from a wallet to a phone so they can get in touch with loved ones on Christmas to where their baby is going to get formula.”

Fruetel said fire crews will remain on scene throughout the day and said it could take into Thursday to extinguish. 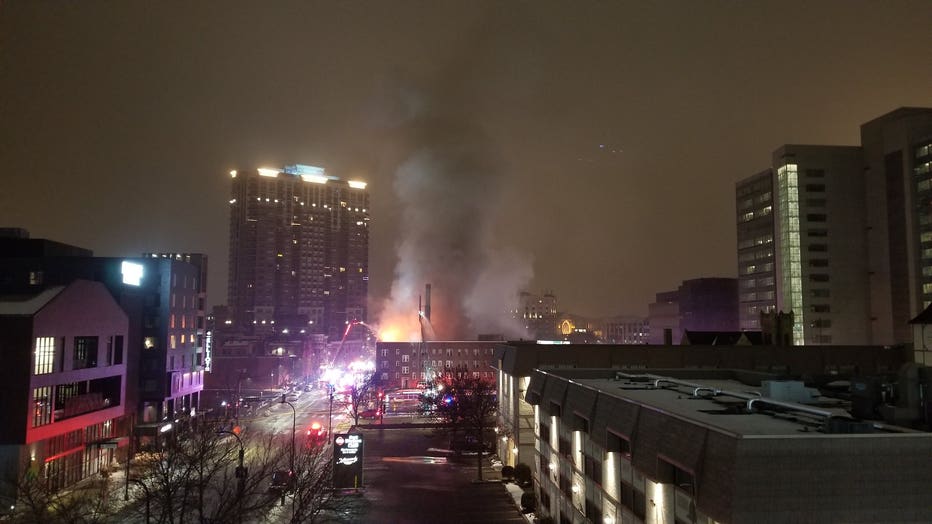 Even more than 16 hours after fire broke out, FOX 9 crews spotted flames and smoke coming from the structure. Around 4 p.m., fire crews roped off the sidewalks around the building, concerned a weak wall could collapse.

The cause of the fire remains under investigation. Firefighters say the building is likely to be a total loss.