Robot at family turkey farm keeps an eye on the flock

he robot is being tested at Zimmerman Farms and it roams around the barn to keep an eye on 8,000 young turkeys to make sure they stay out of trouble.

NORTHFIELD, Minn. (FOX 9) - From smartphones to smart homes, technology is designed to make our lives easier. Now, a pilot program at a family farm in Northfield, Minnesota is ready to spread its wings.

While advances in technology walk a tightrope between the present and the future, they are also ruffling a few feathers on one Minnesota farm.

John Zimmerman’s family has produced turkeys since the 1950s and has owned the farm for 150 years.

“It’s mainly the independence,” Zimmerman said. “I can do what I want when I want to. It’s a fairly good living, and I like to see the fruits of my labor feed so many people.” 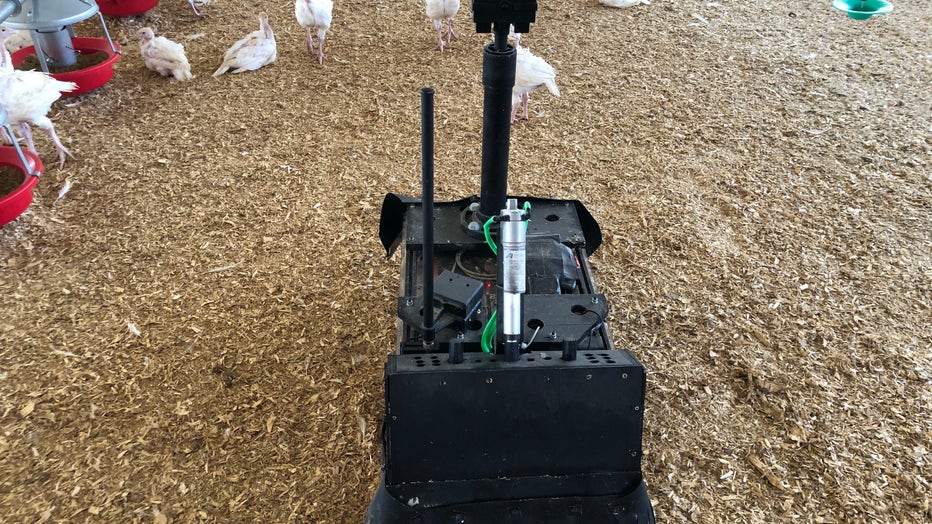 Known as 'Poultry Patrol,' this robot helps a Northfield, Minn. farmer keep an eye on his fleet.

With six barns to manage between himself and one employee, the amount of manual labor is enough to make anyone cry “fowl.”

That’s where Poultry Patrol could come in handy.

The robot is being tested at Zimmerman Farms, and it roams around the barn to keep an eye on 8,000 young turkeys to make sure they stay out of trouble.

“My dad passed away and I can just see him shaking his head,” Zimmerman said. “’What the hell are you doing, John? Why are you letting a robot? Why are you doing this?’ Because he had trouble with an electronic thermostat.”

With three cameras and an environmental sensor, the robot can monitor conditions like temperature, humidity and ammonia levels as it drives around.

One day, its developer hopes it will be able to remove dead poultry, pick up eggs and till the bedding on the barn floor to keep it fresh for the birds. 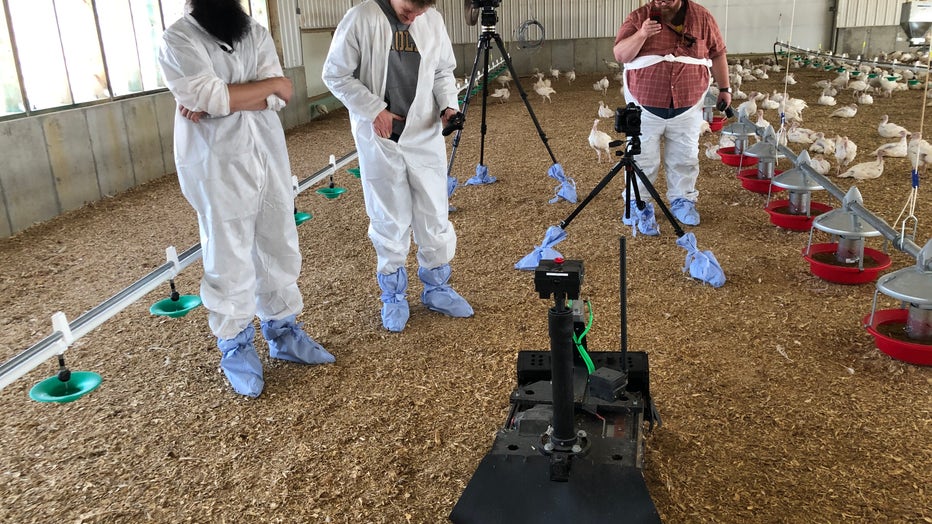 This robot keeps an eye on a flock of turkeys for a Northfield, Minn. farmer. (FOX 9)

“Eventually, it will be autonomous and it will 'Roomba' around the barn without people having to watch it,” said Jack Killian, who developed the robot at the tech product incubator Digi Labs. “There are variations we can put on that. As it's 'Roombaing' around, it can notify the farmer if it notices something. ‘Hey, I just saw this bird limping. Is this normal?’ Or, the farmer can be like, ‘I don’t care about it notifying me. Just give me a summary at the end of the day.’”

Killian said his pet project is no wild goose chase. In fact, he came up with the idea while working on a goose-chasing robot for a homeowner on Lake Minnetonka as a graduate student at the University of Minnesota.

“They are very good about forming a line of geese and walking back and forth on the lawn covering it in goose poop, so it was unenjoyable and you could basically not walk around it. So, the robot has its charging station, it can detect a goose and notify the operator to log on and chase the goose. We have a code for an autonomous chase, but we still have to build some trust that it doesn’t decide there’s a goose in the lake and decide to chase it right in,” Killian said.

After learning that Minnesota is the nation’s number one turkey grower, Killian thought the roving robot could gobble up some of the tedious work involved in making sure the birds are well taken care of.

“They don’t seem overly scared of it,” he said. “They don’t particularly care other than when it is making them get up and move. They are a little annoyed. Otherwise, they are perfectly fine with it.”

While Poultry Patrol is already at the top of the barn’s pecking order, if it can make Zimmerman’s turkey farm more efficient, he says it would be reason enough to give thanks.

“I’m not looking for some Terminator to come in and take over, but I want to do some of the drudgery tasks,” he said.

“I think the sky’s the limit,” he added. “That’s what’s been fun with those guys, is imagining what it can do and when they go to work on the program to make it happen.”

Killian says the plan is to continue to test Poultry Patrol at Zimmerman Farms through the end of next year. Then, if all goes well, they would sell more of the robots to other farms across Minnesota and eventually the rest of the country.