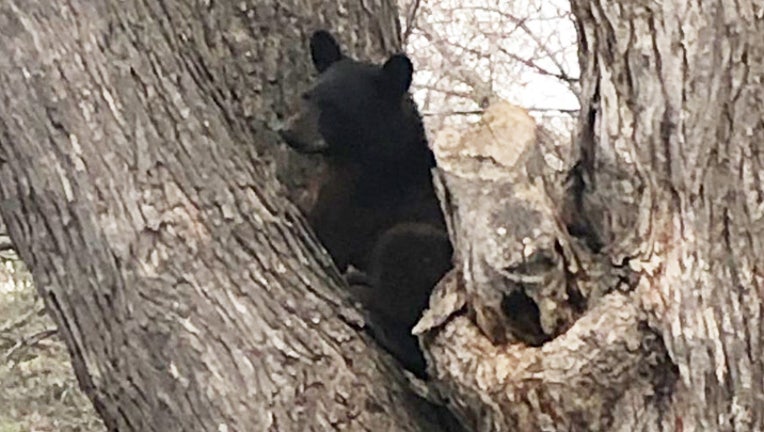 A file photo of a bear in a tree.

WOODBURY, Minn. (FOX 9) - Homeowners in Woodbury’s Evergreen neighborhood are keeping their eyes peeled after several bear sightings right in their backyards. No one has been hurt, but the animal has left behind a mess when helping itself to dinner.

"I’ve been in this community for over 20 years, and this is the first time I’ve seen a bear," neighbor Bill Rueber said. "He’s tearing my feeders apart, it’s costing... I’ve had to repair three feeders now."

A bear was spotted roaming a Woodbury neighborhood this week.

Rueber says the animal has gotten all too familiar with his house, on three nights in the last week. First was Monday night, when he heard the loud crash of his bird feeder out back, around 10:30 p.m.

"When I got up and looked out at the backyard there was a bear on the ground, feeders knocked over... he’s rooting around in the feeder," Rueber explained. "He stood up and he was about 6 feet tall."

Woodbury Public Safety is aware of the bear, but the Minnesota Department of Natural Resources says it will not remove the animal unless it becomes aggressive. So homeowners are bringing anything edible indoors, hoping the animals moves on on its own.

"It’s been as close to a half a block away at times," neighbor Pat Connolly said. "A bear, a healthy bear."

Connolly is vice president of the Evergreen Country Homes Association, and he’s seen video of the neighborhood’s new neighbor online.

"You see a bear, and OK, there’s a bear," Connolly said. "They were here first, we’re intruding on their property."