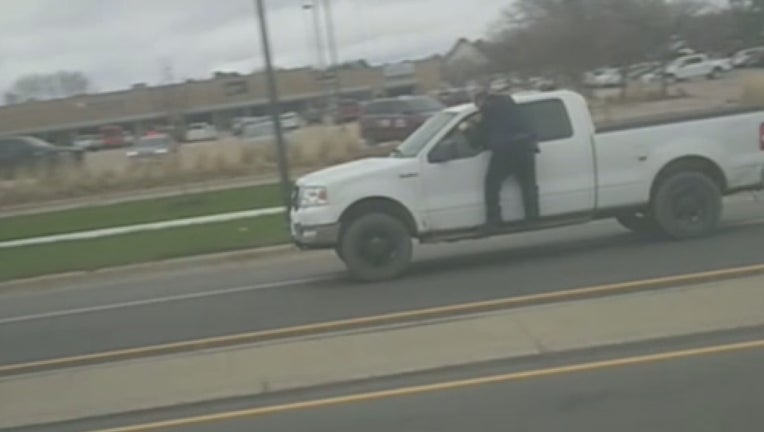 Viewer video captured the moment a police officer in Hutchinson, Minnesota was left hanging onto a suspect's truck as he drove away.

HUTCHINSON, Minn. (FOX 9) - Police say a 61-year-old man assaulted a Menard’s employee and struck an officer with a hammer after a mask-related dispute in Hutchinson, Minnesota Wednesday.

According to Hutchinson Police, the incident occurred just before 2 p.m. Wednesday at the Menard’s on Montreal Street Southeast in the city.

Police say a 61-year-old man assaulted a Menard’s employee and struck an officer with a hammer after a mask-related dispute in Hutchinson, Minnesota Wednesday. Video Courtesy:&nbsp;Mason in Hutchinson

Police responded to a report that the man assaulted an employee with some lumber after the mask dispute.

The suspect then left the store and was seen by police in a nearby Walmart parking lot. An officer tried to stop the vehicle, but a "slow speed pursuit" began near the Hutchinson Mall, police say.

The vehicle eventually stopped, but when an officer engaged the suspect through the driver’s side window, the officer became trapped in the window and the driver drove off with the officer hanging onto the vehicle.

The officer was struck in the head with a hammer during the incident. The officer was taken to Hutchinson Health for his injuries. He has since been released and is recovering at home.

The driver, a 61-year-old Hutchinson man, was arrested at the scene and booked into the McLeod County Jail on probable cause first degree assault.

The McLeod County Sheriff is investigating the incident.