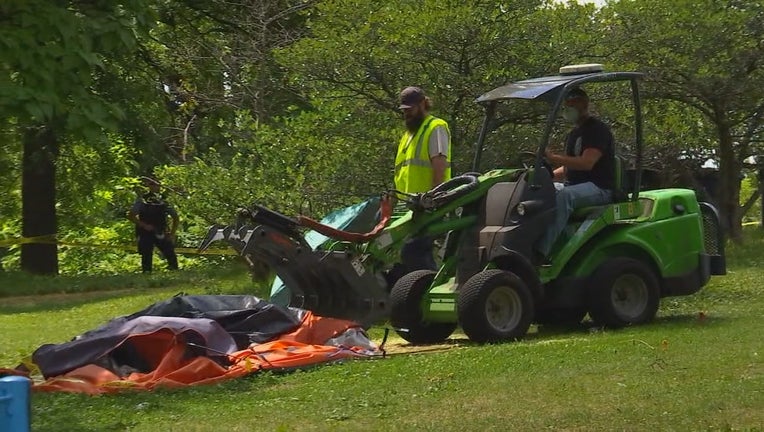 MINNEAPOLIS (FOX 9) - Minneapolis Park and Recreation Board staff and contractors spent Monday dismantling tents and clearing out supplies as the city seeks to shrink the size of the homeless encampment at Powderhorn Park.

One of the encampments at Powderhorn Park was cleared out by crews Monday.

As crews cleared the area, 38-year-old Santanna prepared to make the move to a new encampment at Lake Nokomis.

“I ain’t got no support, really - just off parole, getting my life back together. All that happened, and now nowhere to go. I’m running around like a chicken with my head cut off, dealing with it day by day,” he said.

Some of the park neighbors looked on with mixed emotions. The encampment had exploded in size in recent weeks - to more than 300 tents - right in front of them.

The encampment brought with it human suffering, as well as crime, drugs, piles of garbage, and noise complaints.

“Where are they going to go? And yet, happy to have peace again. It deteriorated very quickly a few days ago,” one neighbor said.

The Park and Recreation Board ordered the dismantling of the Powderhorn East encampment because it was deemed dangerous, with at least 7 violent crimes documented there.

Staff said almost everyone staying at the encampment complied with orders to leave by the afternoon. Transportation and shelter were provided to those who wanted it. However, officials said about two or three people refused to leave the park, and a few dozen activists showed up opposing the dismantling. Approximately 20 people were arrested as a result.

The larger Powderhorn West encampment will be left alone for now, but the park board eventually wants to max out at 25 tents in any one encampment, spread out over a to-be-determined 20 city parks.

“This is going to take time. Everyone wants it to happen overnight - that’s not an option. We are going to do this in a respectable, humane manner,” said Dawn Sommers with the Minneapolis Park and Recreation Board.