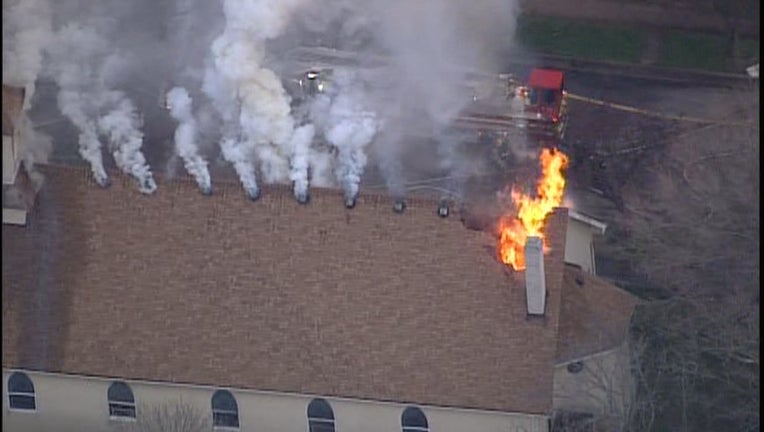 Firefighters are battling a fire at a church in northeast Minneapolis. (FOX 9)

MINNEAPOLIS (FOX 9) - A church community in northeast Minneapolis is now without its church, after a serious fire destroyed the building. However, many of the parish families have been with the church for four or five generations, and they aren’t giving up.

Sacred Heart of Jesus Church was built in 1914, but on the night of April 19, everything changed for the Polish National Catholic Church congregation.

A church community in northeast Minneapolis is now without its church, after a serious fire destroyed the building. However, many of the parish families have been with the church for four or five generations, and they aren’t giving up.

"I was shocked, speechless, I was in awe, I really didn’t believe that anything like this would ever happen to this church," parishioner Amy Grose said.

"I’m still in a state of shock," parishioner Janet Ray Mozdzyn added. "But I have such amazing memories and that church is in my heart and my soul and it will always be there."

Father John Kutek says he was eating dinner last Monday when he got a call and learned that his church was on fire.

"[The] church was burning, so it was like my heart burning too," Fr. Kutek explained.

A devastating fire overtook the structure, tearing it apart. However, its congregation is now arguably more together than ever before. Once the flames were out, parishioners went in, saving what they could.

"Going through the debris inside of the church, digging for anything and everything we could find," Janet explained. "Just mounds and mounds of soot, mud. Everything was wet, so it was like mud, and we had to be careful, there were nails everywhere."

Now the small parish hall across the street from the church has become their new temple. It held a mass service on Sunday morning, only six days after the fire.

"Very much the same, powerful, very powerful, and it felt like a church in there," Janet continued.

"It’s too soon to say anything about plans, right now we want to heal our wounds," Fr. Kutek said of the future. "We would like to wait for lead from above. God will give us an answer what to do next."

An investigation into the cause of the fire is ongoing, but at this time the source of the flames is undetermined.