From fun facts to life lessons, one officer in New Brighton has found a unique way to brighten his students days with daily drawings.

NEW BRIGHTON, Minn. (FOX 9) - From fun facts to life lessons, one officer in New Brighton has found a unique way to brighten his students days with daily drawings.

It’s the end of the day at Bel Air Elementary and it’s all hugs and high fives for Officer Brian DeDominces.

Before he sends the students off for the long MEA weekend with a series of high fives and goodbyes, Officer “Dedo” illustrates just how much he enjoys being a school resource officer. 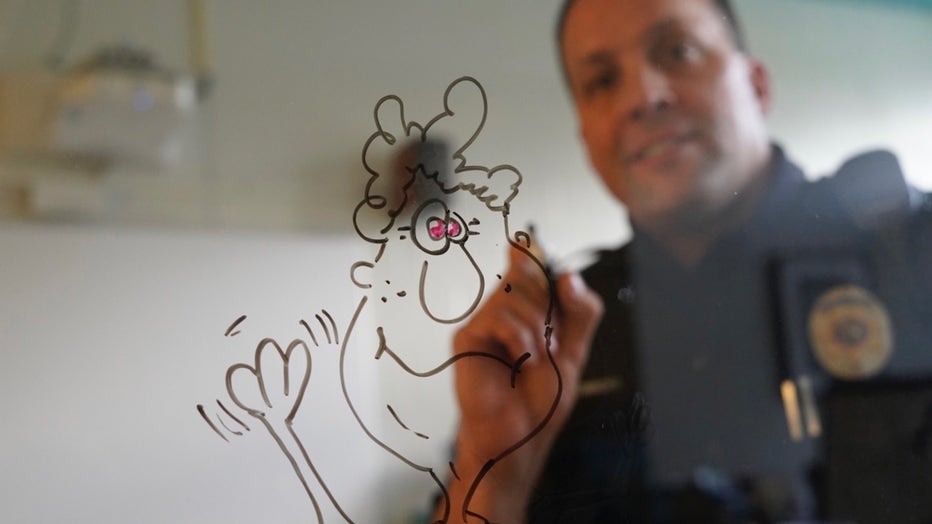 A local school resource officer connects with students by doodling on his school's whiteboards almost every day.

DeDominces clearly has a way with kids, but he also has a talent for drawing their attention.

"Just putting smiles on kids’ faces,” he said. “Seeing kids, helping them through their problems. If they have problems, coaching them. Teaching them life lessons. Just being a buddy to them. That kind of thing."

Three years ago, Officer DeDo started doodling on the dry erase boards scattered around the three schools he works at. Even though he has no formal artistic training, he thought his kooky cartoons would be a good way to connect with students.

"I think there was a whiteboard, a dry-erase board, with nothing on it,” he said. “I was passing by and next thing you know there's a marker in my hand. You just go with it. And some kid notices what you are doing or they pass and they are curious. ‘What are you doing?’ Drawing something, come back and see it in a little bit."

So almost every day, DeDominces comes up with a new creation to capture his students’ imaginations as they walk the halls.

Some depict superheroes while others are silly, but almost all have a message to help the first through fifth graders make it through the day.

"Mostly people, faces - sometimes it’s funny faces,” he said. “Sometimes it’s something about the weather. Bundle up for tomorrow. That sort of thing. Sometimes it’s the definition of a word."

As for his inspiration, it often comes from the students.

"Sometimes it’s a kid walking by,” DeDominces explained. “I might have an idea in my head. If the kid says, ‘Can you draw me something? Can you draw me a Pikachu?’ Alright, I'll look for Pikachu [on my phone].”

“Do you know what a Pikachu is?” asked FOX 9 reporter Maury Glover.

“I do now,” DeDominces laughed. “They are teaching me things too. It goes both ways."

Officer DeDo's doodles are a hit both with students and his fellow staff members.

"I think they are there to really make me laugh and they do because sometimes I come in to school with a rough day and when I see his drawings they make me laugh because of how goofy they are," said one student.

"The thing I love is there's a great sense of whimsy to them,” said Mark Suggs, the Bel Air community liaison. “He keeps in mind who his audience is. He plays to that. That keeps the kids coming back to see what he is going to do next. And the adults, we want to see what's going to come from the mind of DeDo. That's what we ask here. He's doing what he loves to do and the kids see it and they bond over it.”

As for the man himself, DeDominces believes his artistic endeavors paint a picture of the beating heart behind the badge.

"They see that police are real people too,” said DeDominces. “That police care about you and what's the best for you. They aren't always out to get you or write you tickets."

To DeDominces, anything that makes a child's day a little brighter is a work of art.

"Keep doing it as long as the kids are into it,” said DeDominces. “As long as there are markers and boards and whatever, it’s working out good."