HOUSTON - Joe Biden offered both a heartfelt message to the family of George Floyd and an impassioned plea for racial justice in a recorded video played during funeral service Tuesday in Floyd’s hometown of Houston.

"For most people, the numbness you feel now, will slowly turn, day after day, season after season, into purpose through the memory of the one they lost," Biden said, speaking to Floyd’s loved ones. "But for you, that day has come before you can fully grieve."

“Unlike most, you must grieve in public. It’s a burden, a burden that is now your purpose to change the world for the better in the name of George Floyd,” the former vice president added, whose son Beau died of brain cancer in 2015.

Speaking directly to Floyd’s 6-year-old daughter at one point, Biden said: “Little Gianna, you’re so brave. Daddy is looking down and he’s so proud of you.”

“No child should have to ask questions that too many black children have had to ask for generations — ‘Why, why is daddy gone?’” Biden said. “Now is the time for racial justice. That’s the answer we must give to our children when they ask why.” 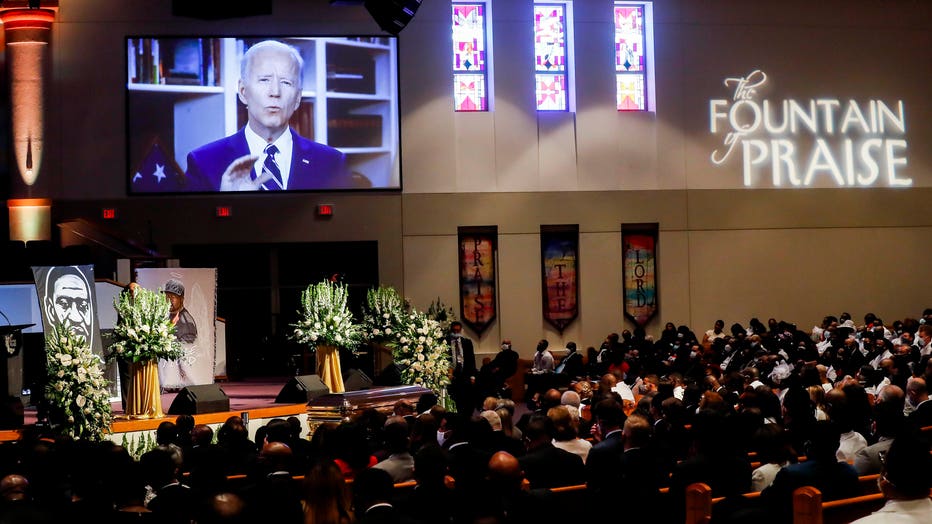 Former Vice President Joe Biden gives a recorded message during the private funeral for George Floyd at The Fountain of Praise Church on June 9, 2020 in Houston, Texas. (Photo by Godofredo A. Vásquez - Pool/Getty Images)

Floyd, 46, was to be laid to rest next to his mother in the suburb of Pearland. He called out for her as a white Minneapolis police officer pressed a knee on his neck on May 25. Widely seen bystander video of the encounter launched protests across U.S. cities and around the world over police brutality and systemic racism.

The presumptive Democratic presidential nominee called for healing of the nation’s wounds and to “remember its pain.”

“We cannot leave this moment thinking we can once again turn away from racism that stings at our very soul,” Biden said.

Biden met with Floyd’s family privately on Monday, according to a photo post on Twitter shared by civil rights leader Rev. Al Sharpton. He recorded the video message to play at the funeral, rather than attending in person, citing Secret Service detail and not wanting to disrupt the service.

The private funeral service was paid for by legendary boxer Floyd Mayweather. Mourners included Reps. Sheila Jackson Lee and Al Green, both Democrats from the Houston area, and the city’s police chief, Art Acevedo. Nearly all the pews were full.

Floyd “often spoke about being world famous one day and he has managed to make that happen in his death,” the funeral program said.

About 6,000 people attended a public memorial Monday in Houston, waiting for hours under baking sun to pay their respects to Floyd, whose body lay in an open gold-colored casket.

Over the past six days, memorials for Floyd were held in Minneapolis, where he lived in recent years, and Raeford, North Carolina, near where he was born. The services have drawn the families of other black victims whose names have become part of the debate over race — Eric Garner, Michael Brown, Ahmaud Arbery and Trayvon Martin among them.

Floyd, a bouncer who had lost his job because of the coronavirus outbreak, was seized by police after being accused of passing a counterfeit $20 bill at a convenience store.

Four Minneapolis officers were arrested in his death: Derek Chauvin, 44, was charged with second-degree murder. J Alexander Kueng, Thomas Lane and Tou Thao were charged with aiding and abetting. All four could get up to 40 years in prison.

Some of the mostly peaceful demonstrations that erupted after Floyd's death were marked by bursts of arson, assaults and smash-and-grab raids on businesses, with more than 10,000 people arrested. But protests in recent days have been overwhelmingly peaceful.

Biden’s campaign on Monday said he opposes growing calls to “defund the police” put forth by activists across the country. But Biden supports the “urgent need for reform,” including more spending on public schools, summer programs and mental health and substance abuse treatment separate from funding for policing.

Supporters say the “defund the police” message isn’t about eliminating police departments or stripping agencies of all of their money, but rather about addressing systemic problems in policing in America and spending more on what communities across the U.S. need, like housing and education.

Biden’s record on criminal justice has been a topic of debate in the 2020 presidential election. Some have blamed the 1994 crime bill he helped write while a U.S. senator for the mass incarceration of racial minorities over the past two decades.