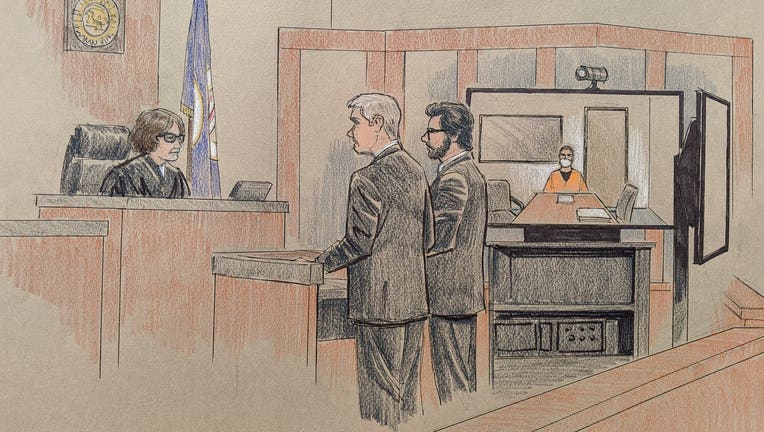 Derek Chauvin made his first court appearance Monday on murder charges in the death of George Floyd. (FOX 9)

MINNEAPOLIS (FOX 9) - Former Minneapolis police officer Derek Chauvin made his first court appearance Monday in the death of George Floyd, where a judge set his bail at $1.25 million with no conditions. Chauvin, a veteran police officer, was seen putting his knee on the back of Floyd’s neck’s as he repeatedly said he could not breathe.

Former Minneapolis Police Officer Derek Chauvin made his first court appearance Monday in connection with the death of George Floyd.

Chauvin said his name, address and answered several questions from the judge, including that he still has guns at his property.

The judge set Chauvin’s bail at $1.25 million with no conditions and $1 million with conditions that include no police or law enforcement work, no firearms and no contact with Floyd’s family.

Both attorneys left court without making any comments.

Chauvin will make his next court appearance in the case on June 29 at 1:30 p.m.

Of the four former officers involved in Floyd’s death, Chauvin was the senior most officer and faces the most serious charges.

Chauvin and the three other officers at the scene were fired just one day after Floyd’s death. The three officers, Thomas Lane, J. Alexander Kueng and Tou Thao have since been charged with aiding and abetting.

At last check, all three officers were still in jail after bail was set at a minimum of $750,000 last week.

In addition to the criminal charges against Chauvin, the FBI and Department of Justice are investigating the deadly encounter.

The State of Minnesota has opened a civil rights investigation into the entire Minneapolis Police Department, going back 10 years, looking for evidence of systemic racial discrimination.