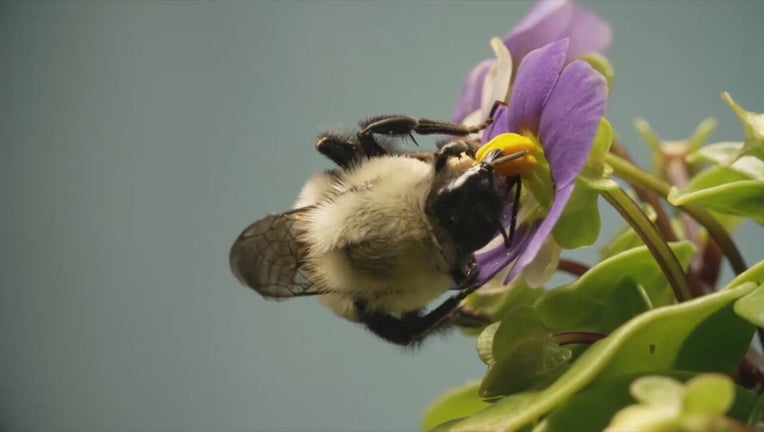 Researchers say bumblebees need all the help they can get as some populations remain threatened. (FOX 9)

MINNEAPOLIS (FOX 9) - As the U.S. Fish and Wildlife Service considers the American bumblebee for the endangered species list, University of Minnesota researchers are asking you to leave some leaves on the ground.

Through identifying tiny dead bees, the people at the University of Minnesota Bee Lab in St Paul study bee health, bee diversity, aiming to learn everything possible about these pollinators vital to our ecosystem.

Bumblebees in Minnesota are in decline and could become the state's second endangered bee behind the rusty patch bee in 2017.

"There’s a lot to learn about bees," says Master’s student Chan Dolan. "They can just be so remarkable and beautiful."

Researcher Dr. Elaine Evans says it’s estimated one in three species of bumblebees in Minnesota is on the decline. Earlier this fall the US Fish and Wildlife Service announced it would spend the next year evaluating whether or not bombus pensylvanicus, also known as the American bumblebee, should be protected under the Endangered Species Act.  That makes work expanding the database of information, focused on more than 480 species of bees living in Minnesota even more buzz-worthy.

"Most of them we don’t’ really know how they are doing we are just learning who’s here, are they still here?" says Evans.

While American bumblebees are not honey producers, they are in metro backyards and could become the state’s second endangered bee behind the rusty patch bee in 2017. Along with continuing to discourage the use of pesticides Evans says this time of year leaving some leaves on the ground, and not raking everything in your yard can help.

"The entire population of next year’s bumblebees are dependent on those queens surviving the winter and they need that insulating layer of leaves." Says Evans. "They’ll be there just under the leaves or just a couple inches down.  So if there are messy corners in your yard where you can leave those are good."

Evans points not trimming down perennial plants too far can also offer a stem to help bees through the winter, because at this point pollinators need all the help they can get.