WASHINGTON - The National Institutes of Health said Wednesday it has started a study to better understand why some people have suffered severe allergic reactions immediately after receiving the Moderna or Pfizer-BioNTech COVID-19 vaccine.

The U.S. Centers for Disease Control and Prevention monitors such reports of severe allergic reactions — which are very rare. Most have occurred in people with a history of allergies, and "a substantial number" had previously experienced a life-threatening allergic reaction called anaphylaxis, the NIH said.

The NIH’s clinical trial will involve 3,400 adults between ages 18 to 69 at dozens of allergy-research centers nationwide. 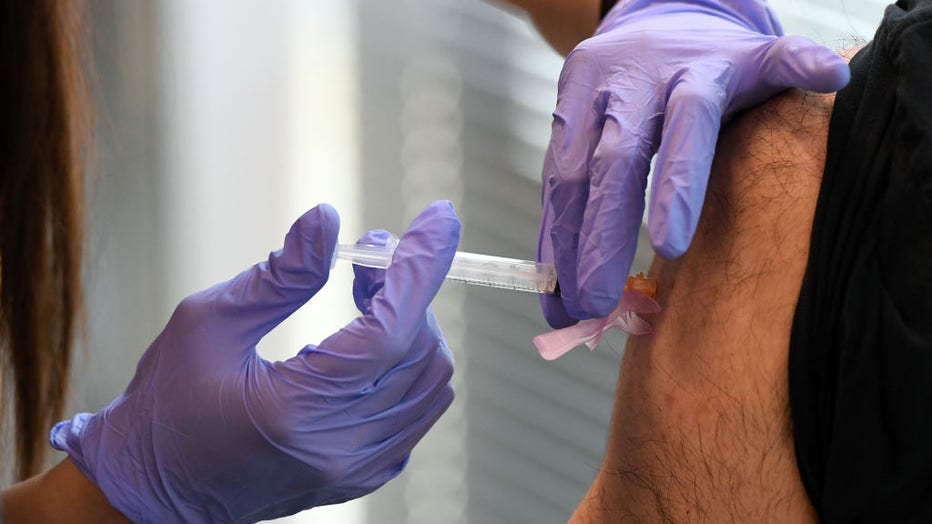 FILE - A nurse administers a COVID-19 vaccination to an Amazon employee at an Amazon fulfillment center on March 31, 2021 in North Las Vegas, Nevada. (Photo by Ethan Miller/Getty Images)

Roughly two-thirds of participants in each group will be female, because severe allergic reactions to vaccines in general —  including the Moderna and Pfizer shots — have occurred mainly in women, the NIH said.

The participants will be divided into groups and will either randomly receive a COVID-19 vaccine or a placebo.

"The public understandably has been concerned about reports of rare, severe allergic reactions to the Moderna and Pfizer-BioNTech COVID-19 vaccines," said Dr. Anthony Fauci, director of the National Institute of Allergy and Infectious Diseases (NIAID), part of the NIH. "The information gathered during this trial will help doctors advise people who are highly allergic or have a mast cell disorder about the risks and benefits of receiving these two vaccines."

But Fauci noted that for most people the benefits of COVID-19 vaccination "far outweigh the risks."

Dr. Anthony Fauci speaks on COVID-19 vaccines and their impact on mutations

Fauci feels confident in our race to vaccinate but remains concerned about the ongoing mutations circulating around the world.

Between Dec. 21 and Jan. 10, when Moderna’s shot began being administered in the U.S., a total of 10 severe allergic reaction cases were reported out of more than 4 million first doses — or 0.000002%.

The CDC said of these rare cases for both shots, a majority occurred within 15 minutes of vaccination.

It has advised health care providers to monitor people for 15 minutes after vaccination, or at least 30 minutes for those who have a history of severe allergic reactions.

An immediate allergic reaction happens within 4 hours of getting vaccinated and may include symptoms such as hives, swelling and wheezing, according to the agency. The CDC classifies a reaction as severe when a person needs to be treated with an EpiPen or requires hospitalization.

If someone does have a severe reaction after getting the first dose, the CDC recommends that they should not get a second shot of that vaccine.