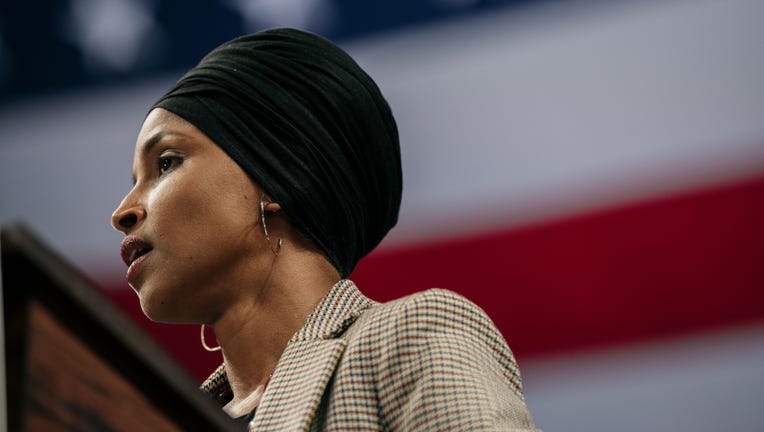 ROCHESTER, N.Y. (FOX 9) - A New York man pleaded guilty Monday to threatening to kill Minnesota Congresswoman Ilhan Omar in a phone call he made to her Washington, D.C. offices earlier this year.

Patrick Carlineo Jr., 55, of Addison, New York, pleaded guilty in federal court to threating to assault and murder a United States official as well as being a felon in possession of firearms, according to a news release from U.S. District Attorney’s Office in the Western District of New York.

According to U.S. District Attorney's Office, on March 21 at 12:20 p.m., Carlineo called the offices of U.S. Rep. Omar in Washington, D.C. and a staff member answered. During the call, Carlineo said, "Do you work for the Muslim Brotherhood? Why are you working for her, she's an (expletive) terrorist. Somebody ought to put a bullet in her skull."

Omar’s staff referred the threat to the U.S. Capitol Police, who began an investigation, along with the FBI.

Carlineo was a previously convicted felon. He also pleaded guilty Monday to being a felon in possession of firearms after investigators found a loaded .45 caliber handgun, three rifles, two shotguns and hundreds of rounds of ammunition at his home.

Omar submitted a letter to the judge ahead of Carlineo's sentencing, saying she does not believe he would be served by a severe prison sentence or substantial financial fine and asking the judge to show him compassion in his sentencing.

As you deliberate the sentencing of Patrick W. Carlineo, Jr., a man convicted of threatening my life, I write to ask for a system of compassion to be applied in his sentencing.

There is no doubt that Mr. Carlineo’s crime is grave. Threatening assassination of a public official in our country is dangerous to both the individual and our republic. Our fragile democratic system rests on the peaceful election of those in power. As someone who fled a war zone, I know how destabilizing acts of political violence can be.

That his threat of violence relied on hateful stereotypes about my faith only makes it more dangerous. This was not just a threat against me as an individual—it was a threat against an entire religion, at a time of rising hate crimes against religious minorities in our country.

But we must ask: who are we as a nation if we respond to threats of political retribution with retribution ourselves?

The answer to hate is not more hate; it is compassion. Punishing the defendant with a lengthy prison sentence or a burdensome financial fine would not rehabilitate him. It would not repair the harm he has caused. It would only increase his anger and resentment.

A punitive approach to criminal justice will not stop criminals like Mr. Carlineo from committing a crime again or prevent others from committing similar acts. Only restorative justice can do that. He should understand the consequences of his actions, be given the opportunity to make amends and seek redemption.

If we truly want to prevent crimes like Mr. Carlineo’s, we must address the root causes of these crimes. The desire to commit violence is not inherent in people. People who threaten or commit violence are often themselves the victims of systemic alienation and neglect. They seek violence because they are taught violence. We must address this systemic alienation through community reintegration and social services.

Threats of political violence and hate speech are not unique to Mr. Carlineo. They are an increasing feature in our public sphere. We will not defeat it with anger and exclusion. We will defeat it with compassion.

We must teach the defendant love.

For this reason, I do not believe the defendant would be served by a severe prison sentence or substantial financial fine and ask you to show compassion in your sentencing.

Thank you for your careful consideration,