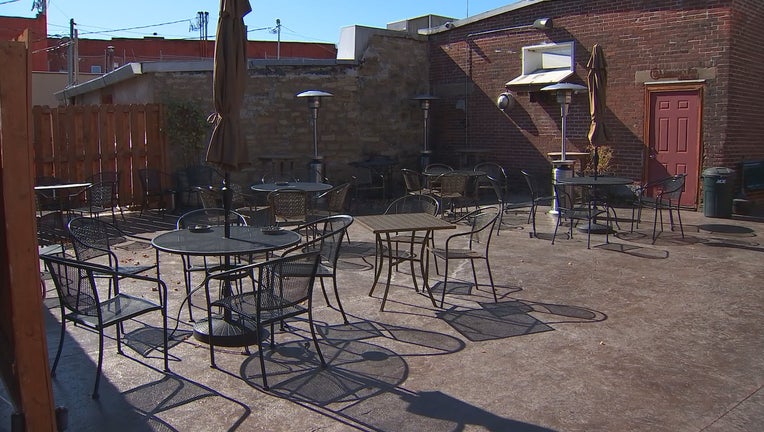 Johnnie’s Bar in River Falls, Wisconsin has its patio open for business as the state puts new capacity restrictions in place. (FOX 9)

RIVER FALLS, Wis. (FOX 9) - A new mandate limiting bars and restaurants in Wisconsin to 25 percent capacity went into effect Thursday, but in western Wisconsin there are questions why the mandate stretches statewide.

“We’re all trying to work together and it’s just too bad that something that’s happening down in Milwaukee or Green Bay is affecting us,” said David Dintemann of Johnnie’s Bar.

A new mandate limiting bars and restaurants in Wisconsin to 25 percent capacity went into effect Thursday, but in western Wisconsin there are questions why the mandate stretches statewide.

On the postcard-like Main Street of River Falls, Wisconsin, Dintemann wonders why new statewide restrictions have to be such a package deal.

“I think it should be county by county, take into effect cases in each area,” he said.

A 25 percent capacity order, he says, won’t be as big a deal to him because he’d already been limiting crowds per county recommendations. While he has plenty of outdoor space, he worries about others in the industry.

“The order is - ah, I feel bad for the other places in town that don’t have the space that I have that are going to try to turn some tables over for food and we’re lucky enough to have a patio with a lot of outdoor seating,” said Dintemann.

The Wisconsin Health Department’s COVID-19 case map shows the hottest spots clearly on the other side of the state, though active throughout and rapidly rising. Now considered the worst outbreak in the Midwest, the state is building a field hospital at the state fairgrounds near Milwaukee to handle the surge.

“Day one - it’s been a little chaotic I guess,” said Alexis Gilles of The Kitchen Table in Prescott, Wisconsin.

Gilles put a couple extra tables on the sidewalk, but the order brings their inside capacity down to 12.

Cases are rising in St. Croix County, too, but much slower with only four people currently hospitalized. The indoor order does not apply to colleges or churches, but will be tough on bars and restaurants. Outdoor dining days are numbered far less than the month of the order.

“And don’t extend it again, that’s what I’m afraid of,” said Gilles. “If it’s only a month, a lot of people could probably survive, but if it goes past that.”

The order also does not apply to political rallies or demonstrations, as both are protected by free speech. Grocery stores are also not affected.