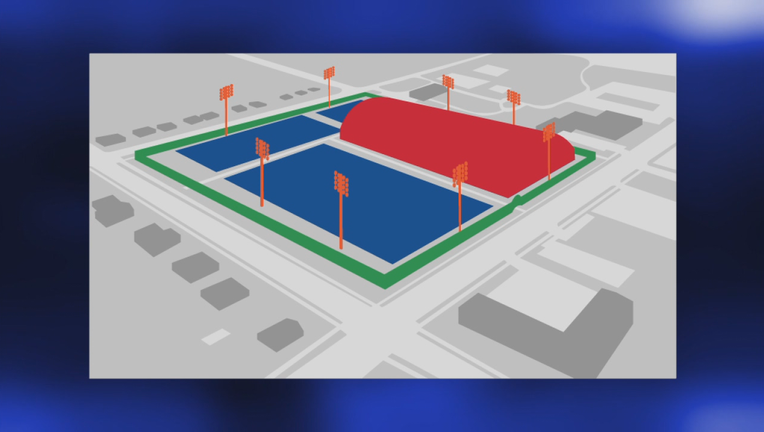 The City of St. Paul needed to approve a variance for a 75-ft dome for the Conway Community Center. (FOX 9)

ST. PAUL, Minn. (FOX 9) - A group of neighbors is worried about safety and parking in their east Saint Paul neighborhood as plans for a sports dome move forward. The Sanneh Foundation wants to put up the dome in order to offer up year-round activities for kids, but those living across the street say "not so fast."

“So we thought we needed to make it a little safer, from a health standpoint,” said Tony Sanneh, the Sanneh Foundation CEO. “And kids actually learn better in an atmosphere they’re happy being in.”

One of those improvements would be a 75-feet long, white dome that would go up seasonally, so the public can enjoy the field all year long.

“If there’s a soccer game, it’s not closed to the public,” said Sanneh. “If there’s a lacrosse game that is the only team using it. We needed it to be an extra 20 yards longer so that there is always open space, so that no matter what is going on the community can always come in and use it.”

This new addition is not exactly a welcome one for some, like Tom Tousignant, who have lived in the neighborhood for over 40 years.

“It’s an eyesore, it’s going to take up a lot of property,” said Tousignant.

The lot is zoned for a 30-foot structure. The dome will require an additional 45 feet. The Sanneh Foundation submitted a variance to the City of St. Paul, which was approved Monday.

“It will be long enough, a little longer than a traditional dome, so no matter what is going on kids will always have a free place to come and play,” said Sanneh.

While Tousignant feels that size is an issue, he and other neighbors are also concerned with what they feel will be an increase in traffic and trouble with parking.

“When they have an event, football games, soccer games, traffic is parked on both sides, makes it hard to get through there,” said Tousignant. “In the winter time like what we’ve got right now when they plow it’s going to make the road narrower and narrower.”

Sanneh says they’re working with the city and working on ways to accommodate parking because they want this dome to be a welcome addition to the Conway Community.

“Community is what spoke to us, and so that’s what they said they wanted, so we raised the money, and are prepared to build it and give them what they’re asking for and at the end of the day, we think the community benefit is really important,” said Sanneh.